Not a week goes by without someone on Twitter asking Manchester’s @MCRMetrolink when they’ll allow dogs to travel on their trams.

Dogs have been banned from the network since 1992 when the service began. There have been several petitions to make a change, and while the bylaw was reviewed in 2013 and in 2015, it continues to be enforced.

But is Manchester the worst city for travelling around with your pet? TeamDogs put our municipal transport services to the test and found some areas make it much easier for your canines to commute.

London: The capital is a great place to travel around with your dog. According to Transport for London’s official rulebook for customers (its ‘conditions of carriage’), passengers can take any ‘dog or inoffensive animal’ on buses, Tube, tram or train unless there is a good reason to refuse it, for example, it seems dangerous or is not properly controlled.

The only rules are that you can’t let your dog on a seat and it must be kept on a lead or in a suitable container at all times. 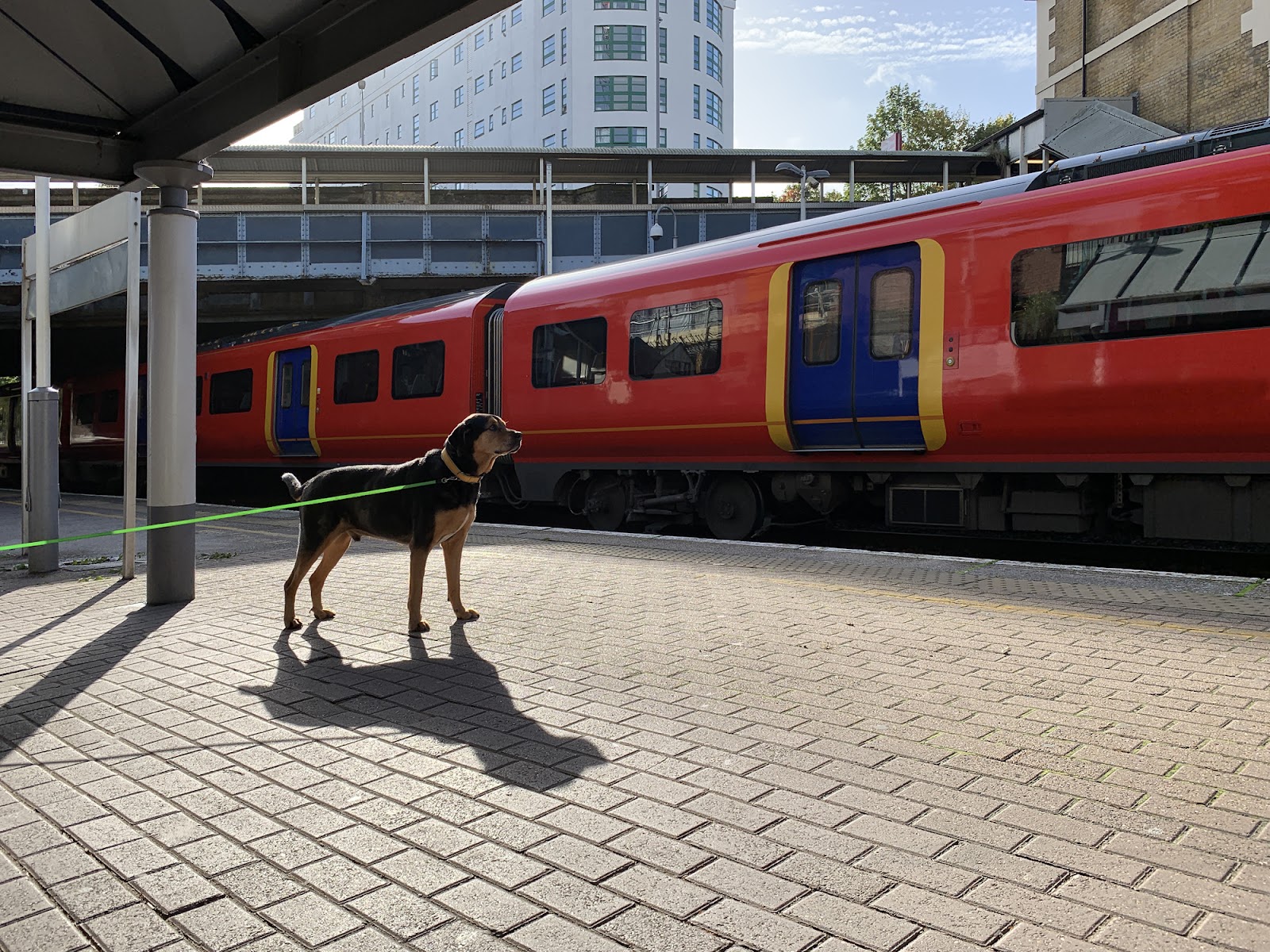 And if you’re using an escalator you’ll need to pick it up to save its paws from those pesky moving steps.

There used to be a rule that dogs could only travel on the top deck of London buses, but this was lifted in 2005 when the old Routemasters were phased out. A TfL spokesperson said: ‘While customers with dogs may sit anywhere on the bus, drivers may occasionally ask them to sit in a particular place if young children or other dogs are on board. All dogs must be either on a lead or in a carrier when travelling on a bus, but they can travel on either deck.’

Newcastle: Our North East pups have no tram ban - they’re permitted to travel free on the Newcastle Metro. They have to stay on a lead, be under control at all times and they’re also not allowed up on the seats. Owners are advised to use the lift or stairs at stations instead of the escalators.

Edinburgh: The Edinburgh Tram runs right down the middle of Princes Street so your doggo can get to the heart of the Scottish capital with ease. It can ride for free, but also has to abide by the stay-on-lead and keep-off-seats rules.

The city’s Lothian buses also allow dogs if there is space on the bus - but may only let one on at a time and priority will be given to guide dogs, assistance dogs and learning dogs. If you can find a space, your dog must be on its lead or in a suitable cage or carry-case. 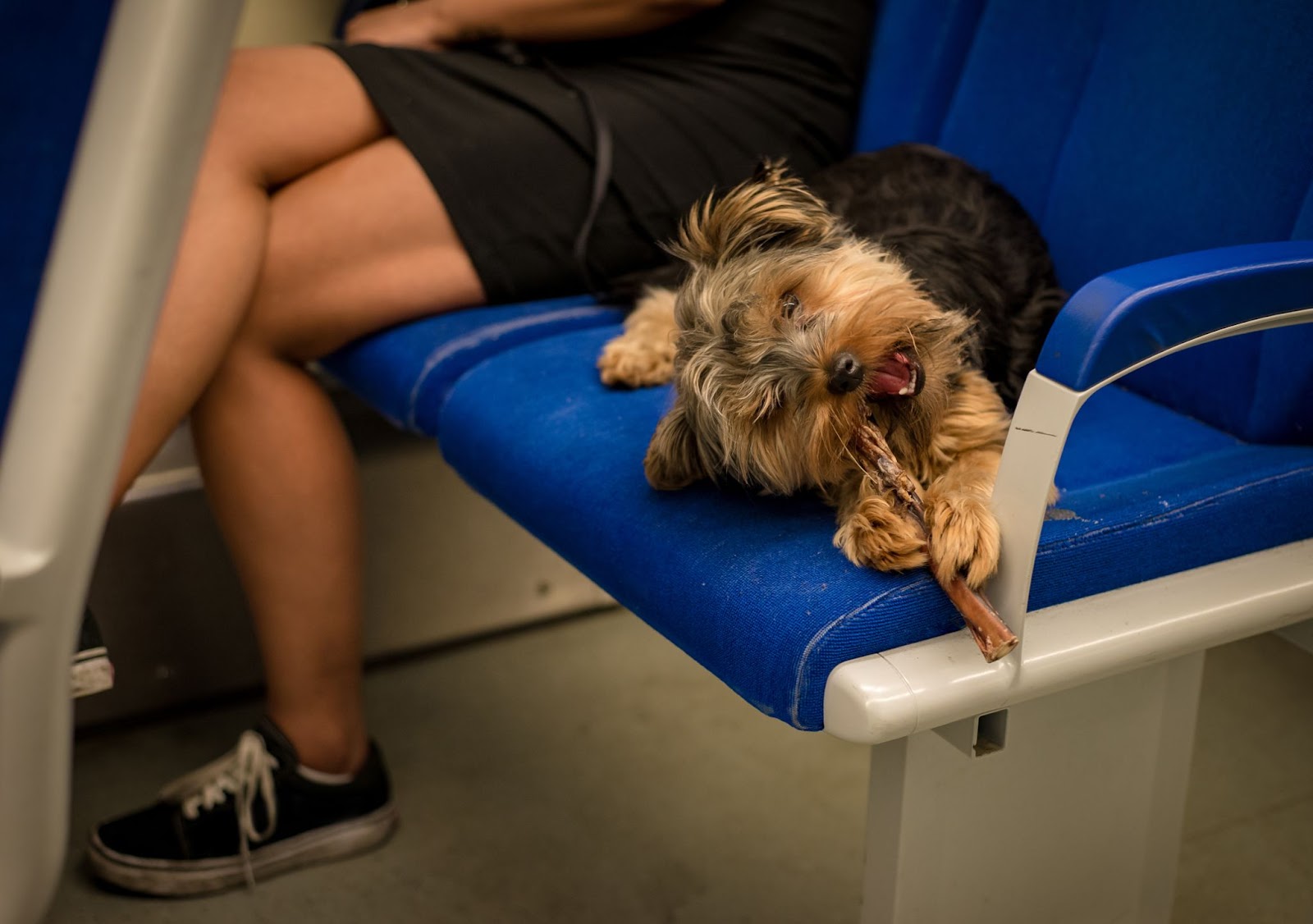 Glasgow: But across the country, the Glasgow subway will not allow larger animals unless it’s an assistance dog. However, it will let small animals be carried in “secure containers”, so you may need to think about investing in a sturdy carry-bag for your canine companion. But be careful what you choose, as one woman tweeted a picture of her dog in a fetching orange plastic mesh bag and was told it wasn’t within the rules: “It needs to be an animal carrier where the dog can't escape or urinate on the seats.“

SPT buses in Glasgow One will allow one dog per deck of the vehicle, but none at all on any of its long-distance motorway-type services. There is no restriction upon guide or assistance dogs.

Nottingham: While you can take your dog on the tram in this East Midlands city, it has to be carried in a suitable container and you cannot put this container on a seat. Even this is at the discretion of staff, so don’t count on the tram as an easy way to travel. The usual exemption for assistance dogs is in place.

Meanwhile on the buses, you get an easier ride - but it comes at a cost! Any well-behaved pup on a lead or in a carry-box is allowed, but you’ll need to pay £1 for a Dog Rover ticket, unless you have a trained assistance dog, which can go free of charge. They’ve also marked the most appropriate seats where these helpful hounds can sit on each bus, and other customers will be encouraged to give them up for you.

Birmingham: In response to one disgruntled traveller on Twitter earlier this year, West Midlands Metro argued that trams are designed to carry a greater number of standing passengers, so having non-assistant dogs on board would present “an additional safety risk”.

NX buses in the West Midlands city will allow “dogs or inoffensive animals” but only at the driver’s discretion. The rule book says reasons why animals will not be carried include “if the animal appears dangerous or likely to upset either other customers or animals already on the vehicle”. The usual no paws on the seat rule applies. 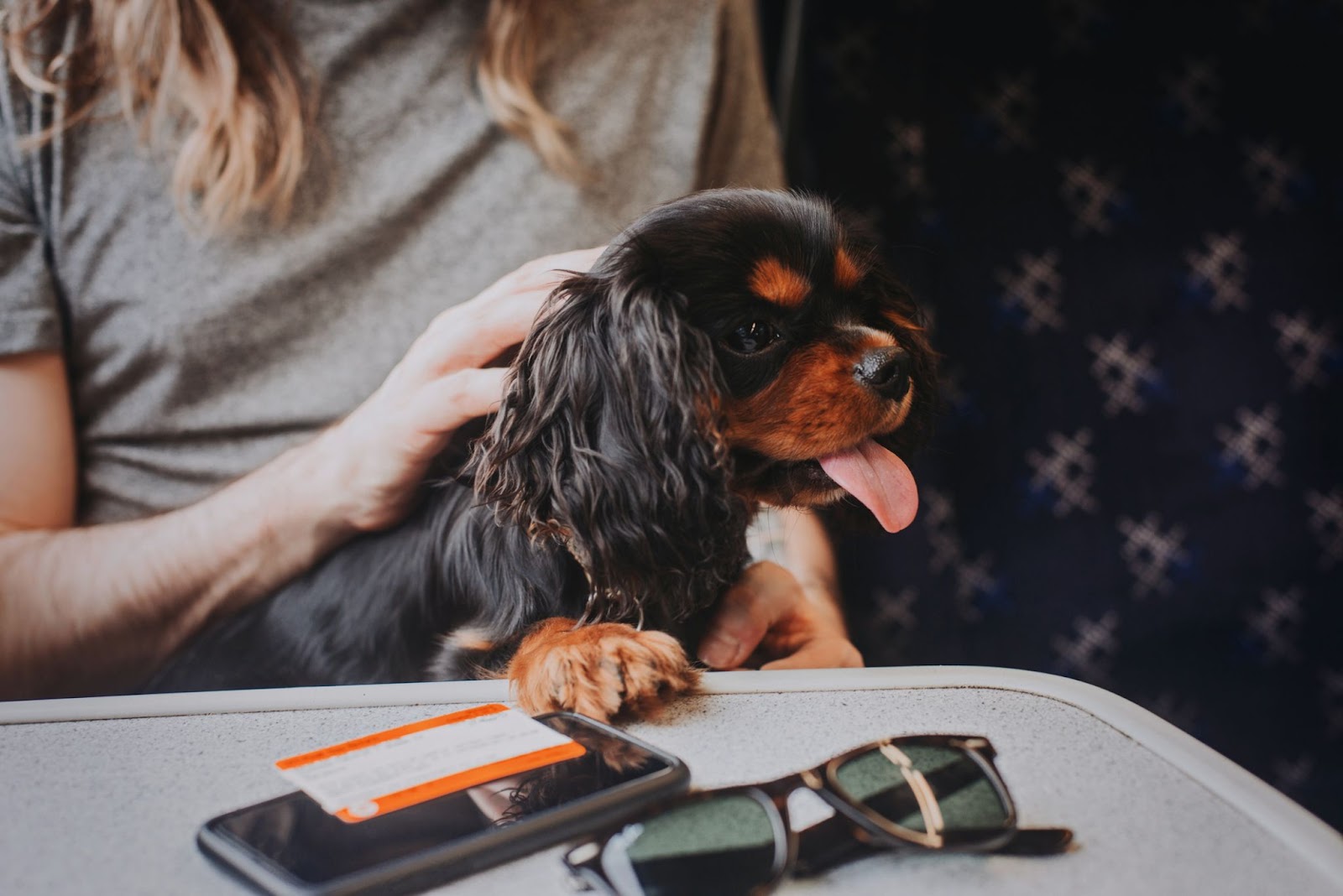 Bristol: In this city it’s not enough that dogs are allowed on local buses (up to two at a time) - well-behaved woofers can also hop aboard sightseeing trips along the harbour with Bristol Ferry Boats and some Bristol Packet boat trips.

Cardiff: In the Welsh capital, guide and assistance dogs can travel at any time as long as there is room for them, and other dogs or small animals - which do not cause disruption to others - would be allowed to travel per bus if the driver permits it to board.

But if you’re going a bit further afield, you’ll need to pay for your pooch - Stagecoach South Wales charges 80p per journey for non-assistance dogs, or owners can pay £6.90 for a weekly ticket. Meanwhile Stagecoach West charges £1.

Blackpool: This seaside resort is another to charge a special dog fare - but it means you can ride on both trams and buses. It’s 60p for a single trip or their cleverly named Rover24 ticket is £1 for 24-hours of unlimited travel. For anyone staying for longer, a seven-day ticket is £5. The only rule is you must hold the lead at all times. Guide dogs and recognised assistance dogs can travel for free on both modes of transport.

Sheffield: Another tram ban in this South Yorkshire city, with the Supertram not letting on any four-legged friends except for recognised assistance dogs. However, their website also says: “domestic pets must be held safely in a suitable cage or transporter for the safety of other passengers and staff”, so if your small dog needs to be carried to a vet you should be okay.

Stagecoach runs the bus service in the city and says “one accompanied, well-behaved dog or other small animal which will not be a danger or a nuisance for other customers or our staff is allowed to travel with you on our buses at the discretion of the driver”. It adds that where appropriate, dogs must be muzzled or put on a lead in accordance with the Dangerous Dogs Act. Small animals must be caged, boxed or kept on a lead - and again, no sitting on seats. The guidance also suggests a dog-fare might be charged, but this also seems to be at the discretion of the driver.

National travel: While National Express runs some local services which allow dogs to board, it’s a different story for its national and international coach services. Even owners of guide dogs are recommended to pre-book a place so the firm can ensure the dog has enough space to lie down for the journey - and they need to provide evidence the dog is highly trained, such as “a certificate, correspondence from the training organisation, ID book, owner training logs or an email from the owner confirming what training has taken place”. 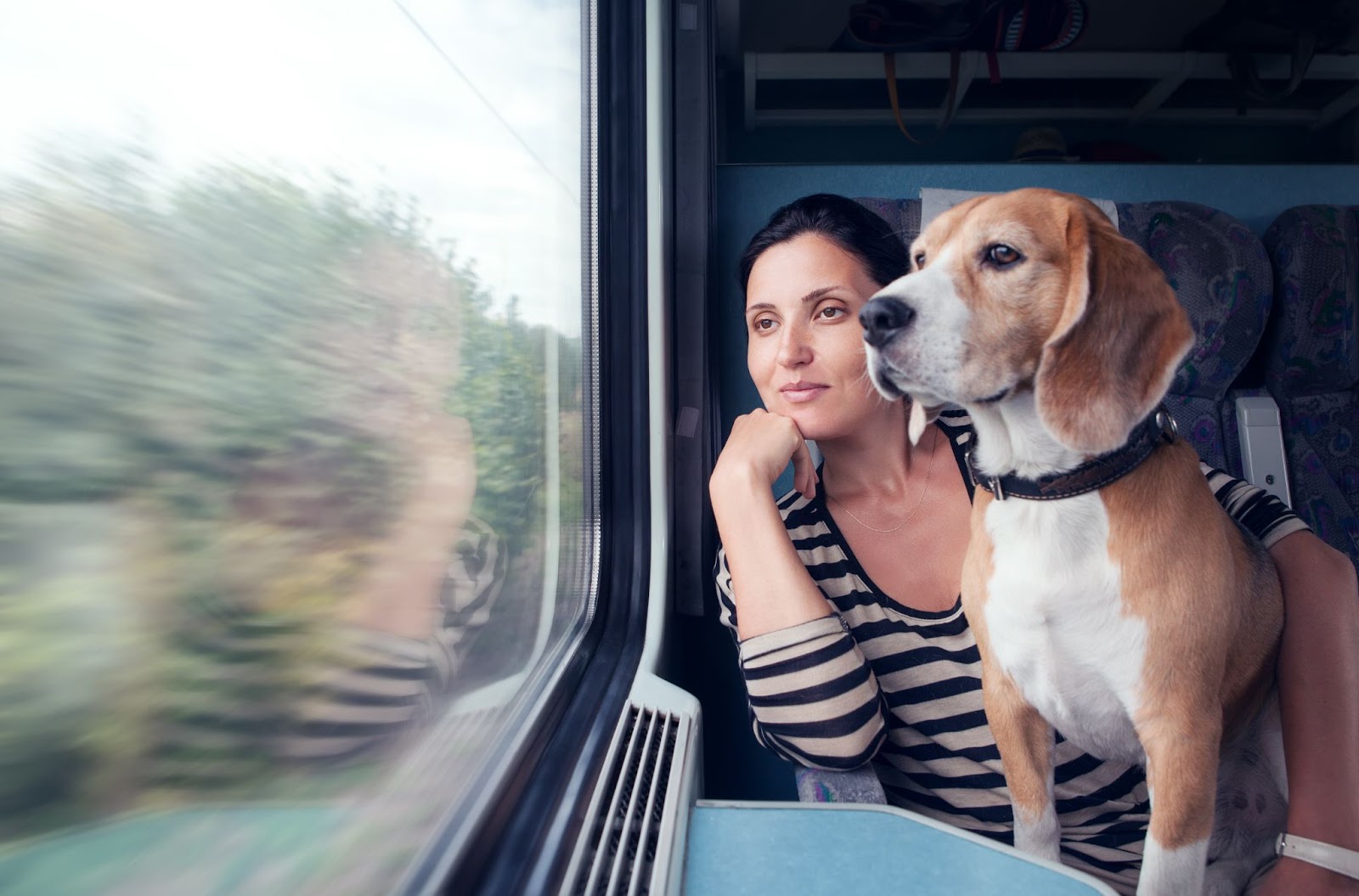 Meanwhile, National Rail will let customers take a maximum of two dogs for free - provided they do not endanger or inconvenience customers or staff.

And you may be able to travel with a bigger pack, but there will be a fee of “no more than 50% of the adult fare for the journey made” and it’s up to each train company - and each ticket inspector - to rule on that. Dogs, unless contained in a basket, must be kept on a lead or in a harness throughout the journey, including at stations. Animals and containers must not occupy seats, otherwise a charge will be made, the website warns.

How to prepare: Wherever you live, the Dogs Trust has some advice for anyone considering using public transport with their pets.

“Just as some humans are happier travelling than others, for dogs, travelling on public transport can be a stressful and scary experience. It's important that you consider your dog's needs and welfare before travelling,” the charity warns.

Be watchful for your dog’s mood and learn to recognise the signs they might be feeling worried or frightened.

“For example, a dog might drool and lick their lips in anticipation of dinner being prepared, which is a perfectly normal bodily response. However, if they begin drooling and licking their lips when getting onto a train these actions might show they are feeling worried about the journey ahead.” 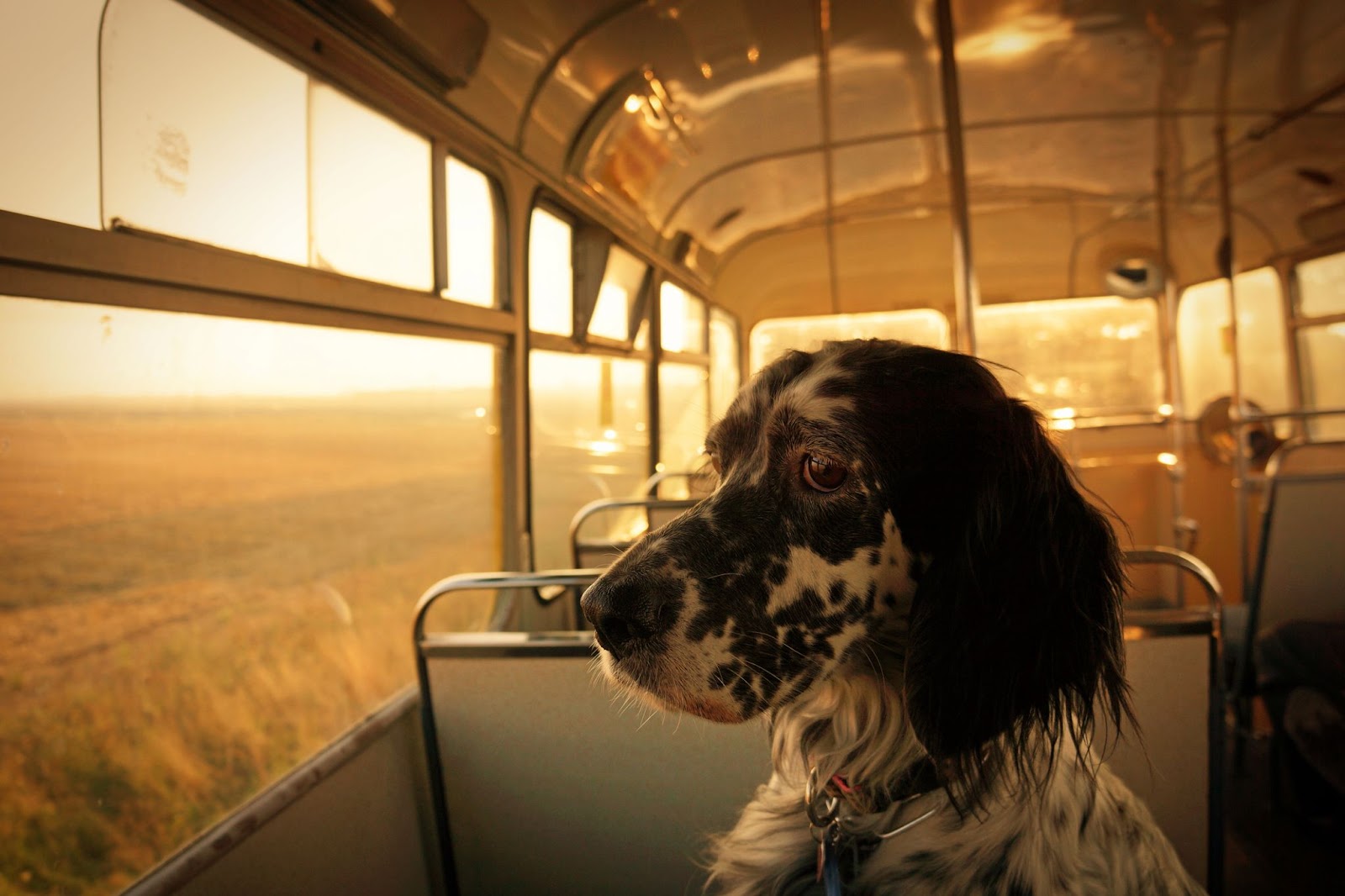 What to take with you

Meals: If you're going to be travelling all day, then remember your dog will need their usual meals.