When your neighbourhood has gone to the dogs… | TeamDogs

For some pet owners you just can’t get “too dog” - we’ve got the monogrammed dog bowls, the giant Cocker Spaniel-face T-shirt, heck some people even start to look like their dogs after a while…

But there’s an easy way to show your devotion - you can make your postal address match your favourite breed.

TeamDogs was curious how many streets in the UK were named after dog breeds and we found a lot more than we were bargaining for.

Sure, if you want to live in Chihuahua Close you’ll need to move to Mexico where they have a whole state named after the tiny doggo that was bred there, and we struggled to find a Whippet Street or Lurcher Lane on the UK map, but there are plenty of pup-themed postcodes you could consider moving to.

From Spaniel Row across to Hounds Gate House in Nottingham (GoogleMaps)

Not surprisingly, there’s a Cocker Lane in the Cumbrian town of Cockermouth, and it runs close to the Cocker River. But for the Spaniel part of the name you have to head south, where Nottingham is home to Spaniel Row, which handily sits just off Hounds Gate.

It was a bit harder to find the Springer side of a potential Spaniel house move - there’s an apartment building in London called Springer Court overlooking the River Lea, and a tiny lane in Doncaster, South Yorkshire is called Springer Drive, but no full residential streets.

Bedlington in the North East just has to have a Terrier Close, doesn’t it? The curly-coated breed was named after the mining town, and in turn the town has a street named after all terriers in general.

The Airedale Terrier originated in the valley of the River Aire, in West Yorkshire, so it wasn’t surprising to find a street with that name in Bradford. 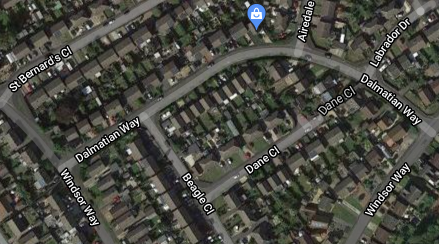 There’s also an Airedale Close in Broughton, North Lincolnshire, where you can choose from a whole neighbourhood of doggy streets - Labrador Drive, Dalmatian Way, (Great) Dane Close, Beagle Close and St Bernard’s Close will all be options for your walkies routes.

In Peterborough we found a Boxer Road, while in Elgin in Scotland you can move in to Collie Street. In Worcester you’ll feel right at home in Labrador Road, whether your favourite is golden, black or chocolate colour.

Southampton residents can settle in Terrier Close, while Alsatian Avenue sits in Clydebank, Scotland, and has green spaces at both ends perfect for zoomies.

Beagle Close turns out to be a very popular address as there’s another in Feltham, London; Abingdon in Oxfordshire; Swindon and Leicester! 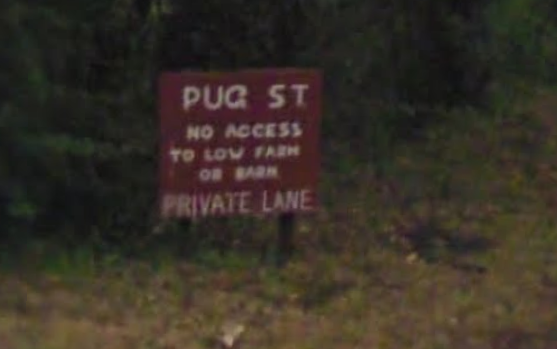 Only Pugs allowed in Diss (GoogleMaps)

For fans of Pugs it’s a bit trickier - there is a Pug Street in Diss, but it’s marked as a private road, and a very tiny cut-through in Witney, Oxfordshire called Pug Lane where you’d struggle to erect a dog kennel, let alone a home.

Further afield, Alsatian Drive in Grand Bank, Canada, is in the perfectly named region of Newfoundland and Labrador, so perhaps they meant to call the town Grand Bark too?

In Modesto California there’s a Chow Chow lane, and in Virginia a Foxhound Road.

If you can’t find a street that suits, there’s always the local pub - there’s The Whippet Inn in Kensal Town, North London; The Bulldog in Royal Leamington Spa and the Border Terrier pub in North Shields. There are reportedly 138 pubs in the UK called Greyhound, and if you don’t mind the hunting connotations you can sup at 120 Fox And Hounds and 114 Hare And Hounds. 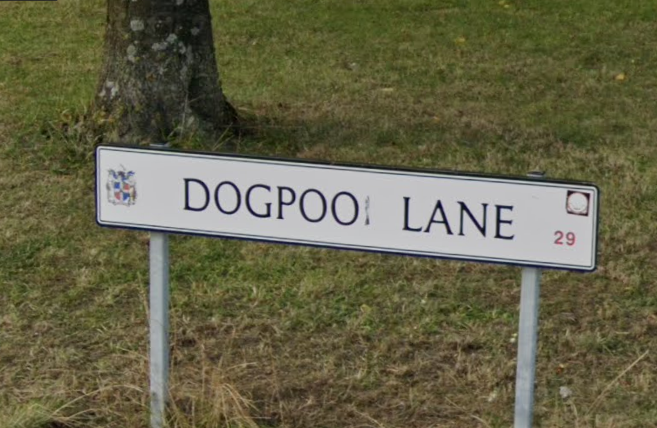 This street has definitely gone to the dogs… (GoogleMaps)

Finally, this might not be an address you particularly aspire to in Birmingham, thanks to vandals who can’t help but obscure the L in the middle of every street sign along Dogpool Lane in the suburb of Stirchley. We only hope the residents are still mindful enough to pick up after their pups!