We’re all working hard to give our dogs the best possible life, and moving to one of these cities could do just that!

New research has revealed the UK’s top places to increase our pets’ quality of life, based on factors like property size, garden size, and amenities such as groomers and pet shops.

House prices in Bromsgrove might set you back by just over £300K but the town has been ranked as  the best place to live when considering your pet’s wellbeing and happiness, with scores above UK  average on across all factors.

The next best location, Bridgend - in Wales - will offer both home and pet owners best value for their  money. The average house price in Bridgend is an appealing £167,325 and ranks just second best as most inviting to four-legged neighbours. In comparison, Sevenoaks in Kent, which  ranks in third place, is one of the more expensive relocation options, with average houses surrounding the half a million mark (£455,828).

It comes as no surprise that London ranks as the worst place to have a pet in the UK — mostly given to the lack of garden space and smaller property sizes amongst the lack of other factors. Pet lovers should also avoid Birmingham and Gateshead if they want easy access to amenities like groomers and training centres. 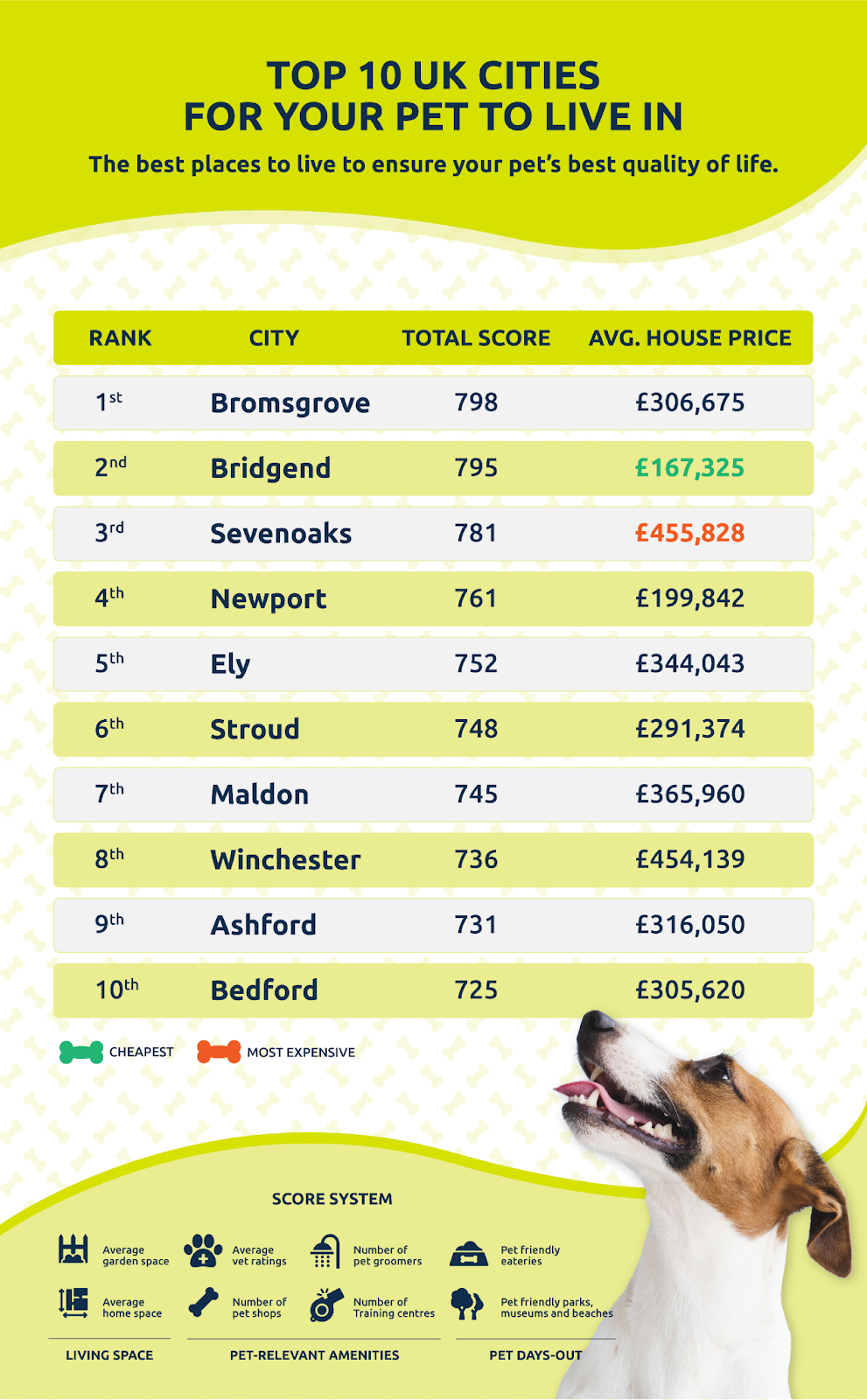 From veterinary practices to groomers - the WeBuyAnyHome survey also rated towns based on their pet-friendly facilities.

Hereford boasts the best veterinary care in the country, tailed by Bingley and Wokingham. Stratford-upon-Avon scores the worst for this factor, but London and Rochdale also score lowly for quality of vets.

Having a variety of reliable groomers is also one of the most important amenities when owning a pet.  Winning this round were Newport, Ashford and Bridgend, which have the highest ratio of pet-groomers  to pets. Unless you work part-time as a dog groomer yourself it’s best to avoid London, Slough and Salford,  which all offer the least grooming options.

The final amenity the study considers is training centres. Newport takes the lead once again, with the most classes and guidance on hand. After that, Ely and Chichester commanded second and third position. Bingley has the most limited selection of dog trainers, followed by St. Helens in Lancashire  and the city of York. 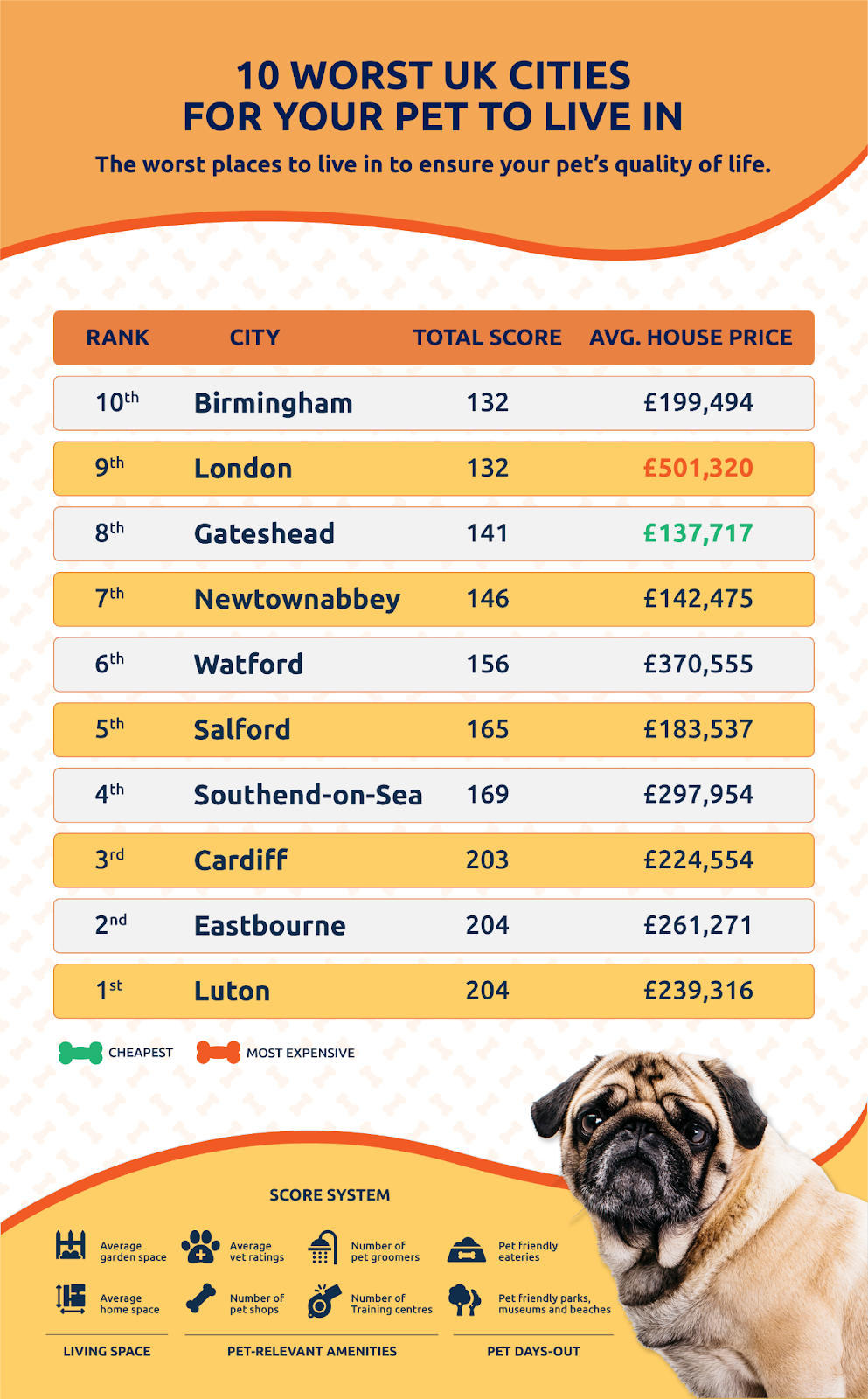 One thing that’s really important to dog owners is being able to take them out socialisng with them - from the pub to tourist activities. Warwick caters best for dog-owners, with options to suit everyone. The next best places to eat out with your  pooch are Chichester and Gloucester. A staggering 23 towns and cities listed only one dog-friendly server. Other places you and your canine will struggle to eat out include Milton Keynes, Rochdale and  Slough.

Which location in the UK offers the best range of dog-friendly days out? Winning this round is Lincoln,  which boasts an impressive range of activities to explore with your dog. Hot on its heels are Warwick and Swansea. The locations with the least dog-friendly days-out were Newmarket, Boston and  Doncaster.

Best and worst per region

For those looking to move but stick to their home region, below you can see a summary of the best  location per region, and the location to avoid when relocating with your pet. 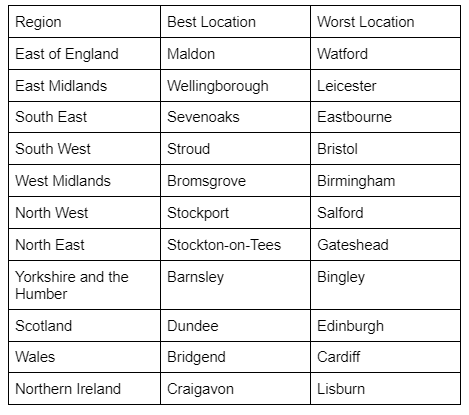 Through compiling their research, WeBuyAnyHome also uncovered a fundamental question: where will one find the UK’s biggest dog lovers? The North-East hosts the most animal-lovers, with 36% of the population owning a dog. With little space to spare in the bustling city, a surprisingly low 9% of Londoners own a  dog, placing it at the bottom of the list.