Marc Abraham is the man responsible for introducing Boris Johnson’s little dog Dilyn to Downing Street, but as rewarding as it was to see a rescue pup arrive at Number 10, it fades into comparison to his latest achievement, an OBE for services to animal welfare in the Queen’s Birthday Honours List.

The vet and ardent campaigner received the news a month ago via an email he presumed was a wind-up, and admits it’s still sinking in.

‘It still feels surreal, I’m just blown away by it all. I wish I could tell my dad and grandma who passed away, as they were very inspirational. My grandma was a survivor of the Holocaust and told me to never give up and anything is possible,’ says Abraham, 48, who lives in Brighton.

Describing his formative self as a ‘geeky, nerdy caterpillar collector’, he reveals it was his childhood dream to become a vet and care for animals, ‘so to receive this for services to animal welfare is crazy, and shines a light on what’s possible and what can be achieved through grassroots campaigning. That’s what’s important about this award’.

Abraham graduated from Edinburgh University in 1995 and was very much focused on his veterinary work both in the UK and abroad with little thought of taking a political stance. But one day in 2009, he was moved to action when eight puppies arrived at his practice suffering from parvovirus, a horrific but common disease often experienced by dogs born on puppy farms. It was a life-changing experience for him. 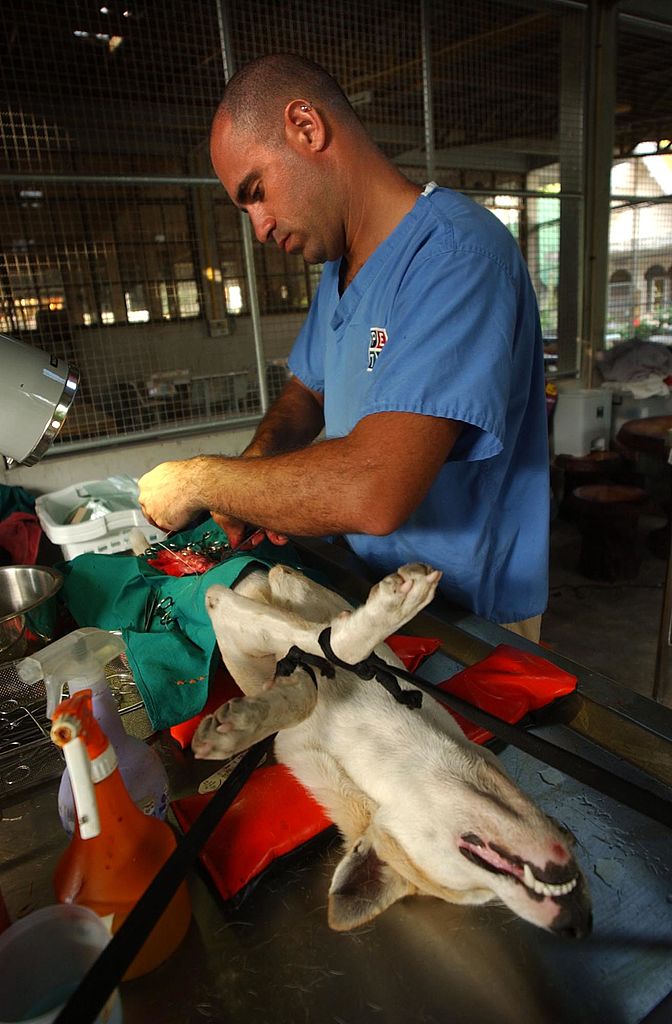 ‘What was rare was to see so many at once. It turned out they’d all been purchased by the same legal third-party dealer who was buying them from a legal puppy farm in Wales, so the whole thing was legal, that was the crucial thing,’ explains Abraham.

‘The Government’s advice at the time was to always see the puppy with the mother in the place it was born. Of course, the same Government was licensing third-party sellers to sell the pup away from where their mum was and where they were born, so the hypocrisy was at the top. I knew I had to do something about why they were in that state and how the law had been complicit in cruelty.’

Abraham founded Pup Aid that same year, a dog-themed homage to Live Aid with a celebrity-judged dog show to raise awareness about puppy farming. This in turn garnered public and press interest, including from the Daily Mirror which he credits with being instrumental in effecting change.

‘I really want to thank them, especially Andy Penman who was tireless in his reporting, and all the readers’.

Caroline Lucas, the MP for Brighton, was also helpful, and invited Abraham to discuss the campaign, and advised him to set up an e-petition around the issue.

A novice in all things relating to politics, he recalls, ‘I was so inexperienced; the first time I went to Westminster I took my mum and grandma with me like I’d won a competition.’

It was the beginning of what has felt like an arduous slog at times, but in June 2019, following 300 further visits to Westminster and relentless lobbying, the Government passed Lucy's Law, named after a rescue Cavalier Spaniel who’d been used for breeding. 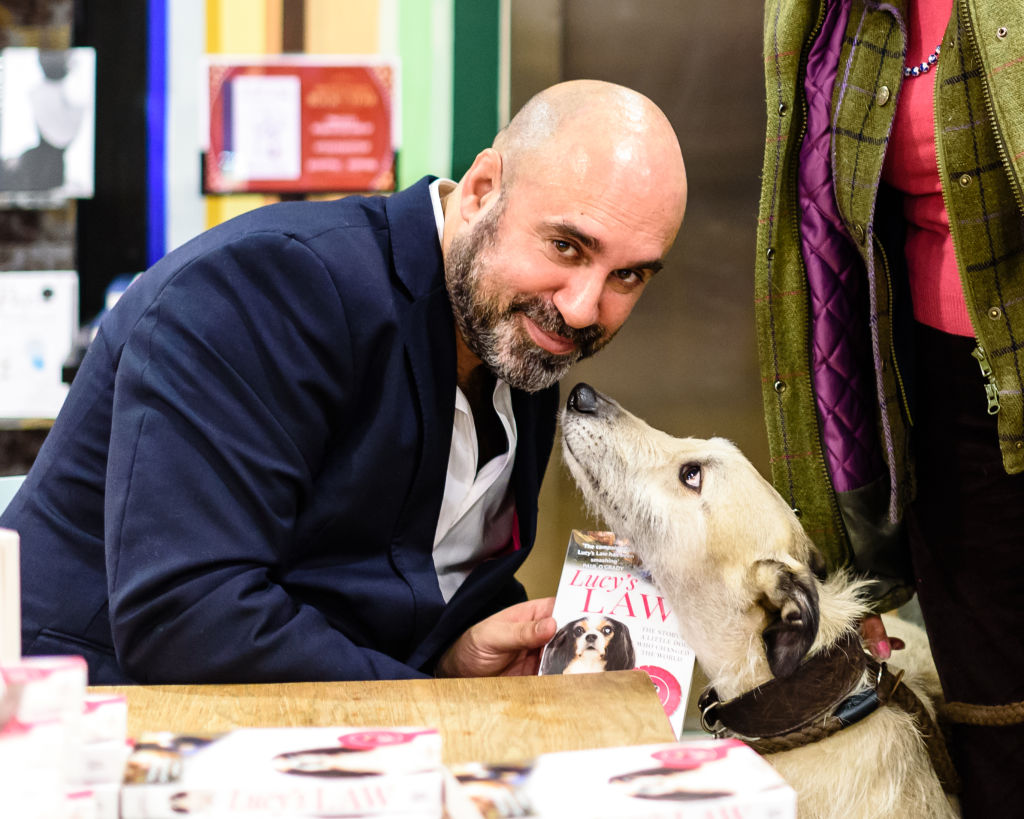 It bans the commercial (for-profit/non-rescue) third-party trade in puppies and kittens, which means anyone looking for one must deal directly with the breeder or rescue centre.

‘What I want to do is emphasise that we all have the tools available to us, in terms of e-petitions, and meeting MPs and putting on events, which can make a difference, and we have responsibility to do that,’ says Abraham who’s now the secretariat of the All-party Parliamentary Dog Advisory Welfare Group.

In fact, his next book is devoted to just that subject - ‘a how-to guide for anyone who wants to make the world a better place’ - reveals Abraham, who stepped down from full-time veterinary work three years ago in order to focus on his writing, educational work, and campaigning.

‘I’d say 98 per cent of campaigning is stressful, lonely, and depressing but the two per cent where you change the law, or source the Prime Minister’s rescue puppy makes up for that.’

His connection to Dilyn began after he heard rumours Boris and Carrie Symonds, who married earlier this month, were looking for a rescue dog.

‘I connected with Carrie who I knew from campaigning and went to Downing Street and had a good old chat. I introduced her to Eileen Jones who runs Friends Of Animals and then got a call from Boris about 10 days later saying they’d chosen Dilyn and how could I make it happen? 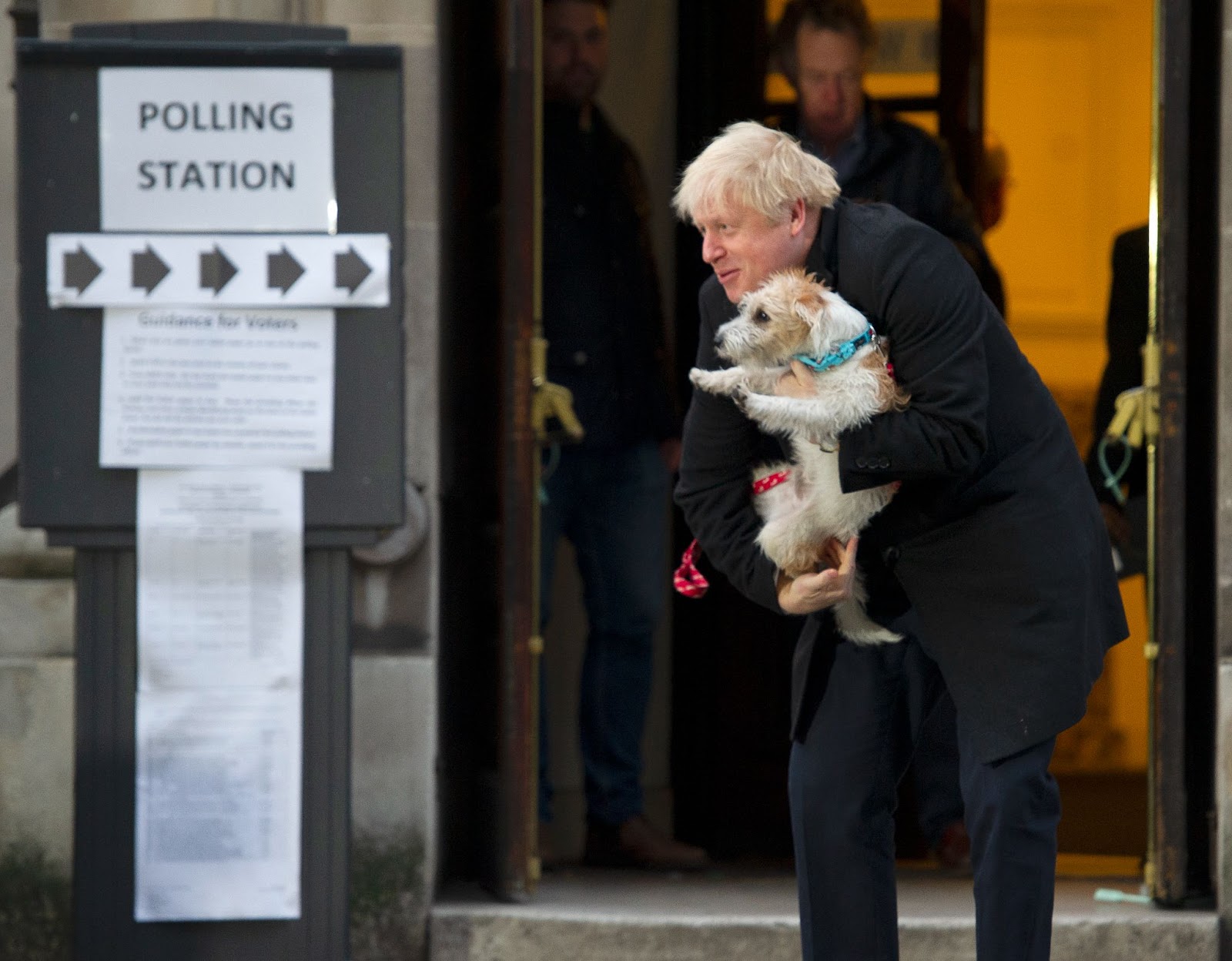 “Dilyn’s such a character, and represents rescues and Lucy’s Law, so to get him in Number 10 was such a big deal, and he’s having the best time.’

Although Abraham doesn’t own any dogs himself, he plans on getting one, maybe two, rescue Greyhounds when he eventually slows down and has more time to devote to them.

‘They’re such gentle creatures. When I see one in the street, I literally turn to jelly. I think it’s their vulnerability,’ says Abraham, who also hopes to host another Pup Aid in the future.

‘There’s another law that’s on the way to being changed, to ban the import of puppies under six months of age. Once that becomes law, there’s something inside of me that thinks we need one more Pup Aid to have a blowout,’ he adds, and why not when there’s so much to celebrate?

‘All the work and campaigning, and Lucy’s Law, and now the OBE, which feels mental to say out loud, it really has been a rollercoaster from 2009 to now.’