If your dog thinks he rules the household, definitely don’t let him see this list of canine deities! From Ancient Egypt to India, Greece and Rome to Mexico, some cultures have a long history of worshipping dogs.

TeamDogs takes a look at our favourite dog gods. 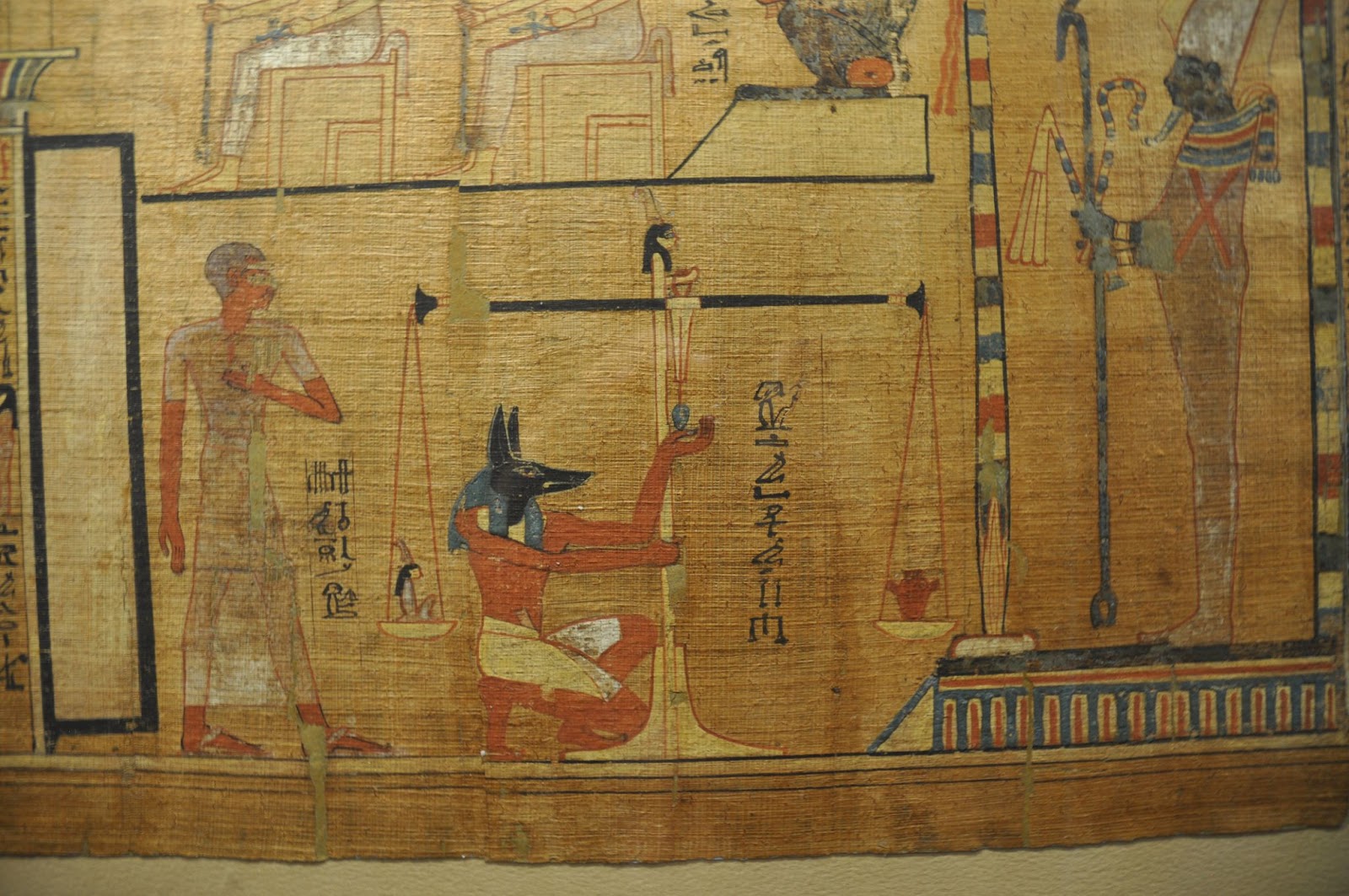 Anubis weighing the heart of the deceased before Osiris (credit: Getty Images)

Ancient Egyptians worshipped several dog-headed deities, with Anubis probably the most well known. In the earliest records from Egypt, Anubis - known as the ‘Master of Secrets’ and ‘The Dog Who Swallows Millions’ thanks to his role as the patron of embalmers and guardian of cemeteries - was depicted in full canine form, but over the centuries he, like Egypt’s other gods, took on a human body and kept only his animal head.

Anubis was the most powerful god of the dead during the Old Kingdom (2700-2200 BCE), and even after he was replaced in the role by green-faced god Osiris, he was still one of Egypt’s top deities. He appears in funerary scenes known as the Weighing of the Heart, where Anubis balances the scales to determine if the deceased’s heart is pure. If the heart weighs heavier than the feather of ma’at or truth, the deceased is devoured by a terrible monster.

The Egyptian dog-god also played a major role in burial rites. A priest wearing an Anubis mask would assist in performing a ritual called the Opening Of The Mouth, where the coffin and mummy were held upright and another priest touched sacred instruments to the mouth of the deceased, so they could breathe and speak again in the afterlife.

Statues of Anubis were often placed in tombs, especially of pharaohs and nobles, to protect their mummies.

Anubis’s wife Anput was a lesser-known deity who also took the form of a jackal - or more often, as a woman wearing a crown with a recumbent jackal on top. She is depicted as either a pregnant or nursing jackal, or is shown carrying knives in her role as protector of Osiris and the pharaoh. She was the guardian deity of the 17th nome (district) in Upper Egypt, which was known as ‘Anubis land’ due to the barren deserts, home of jackals and packs of wild dogs. 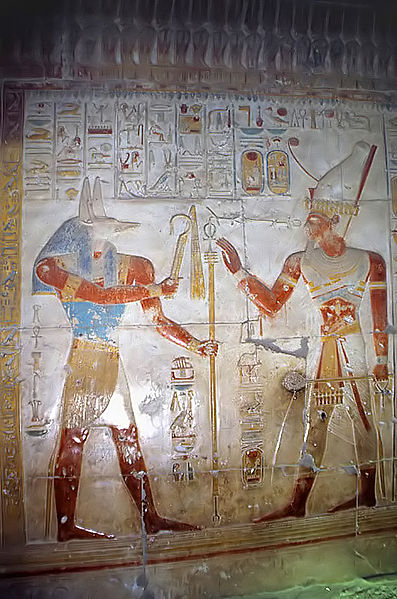 The warlike dog deity Wepwawet is usually shown with grey or white fur to distinguish him from his brother Anubis. At first considered to be symbolic of a pharaoh’s power, Wepwawet eventually became a god in his own right, known as ‘the One Who Opens The Way’, assisting the souls of the dead to the afterlife.

Often thought to take the form of a wolf, Wepwawet was a god popular enough to become the patron of Asyut, known to the Graeco-Roman inhabitants of Egypt as Lycopolis - city of the wolf. 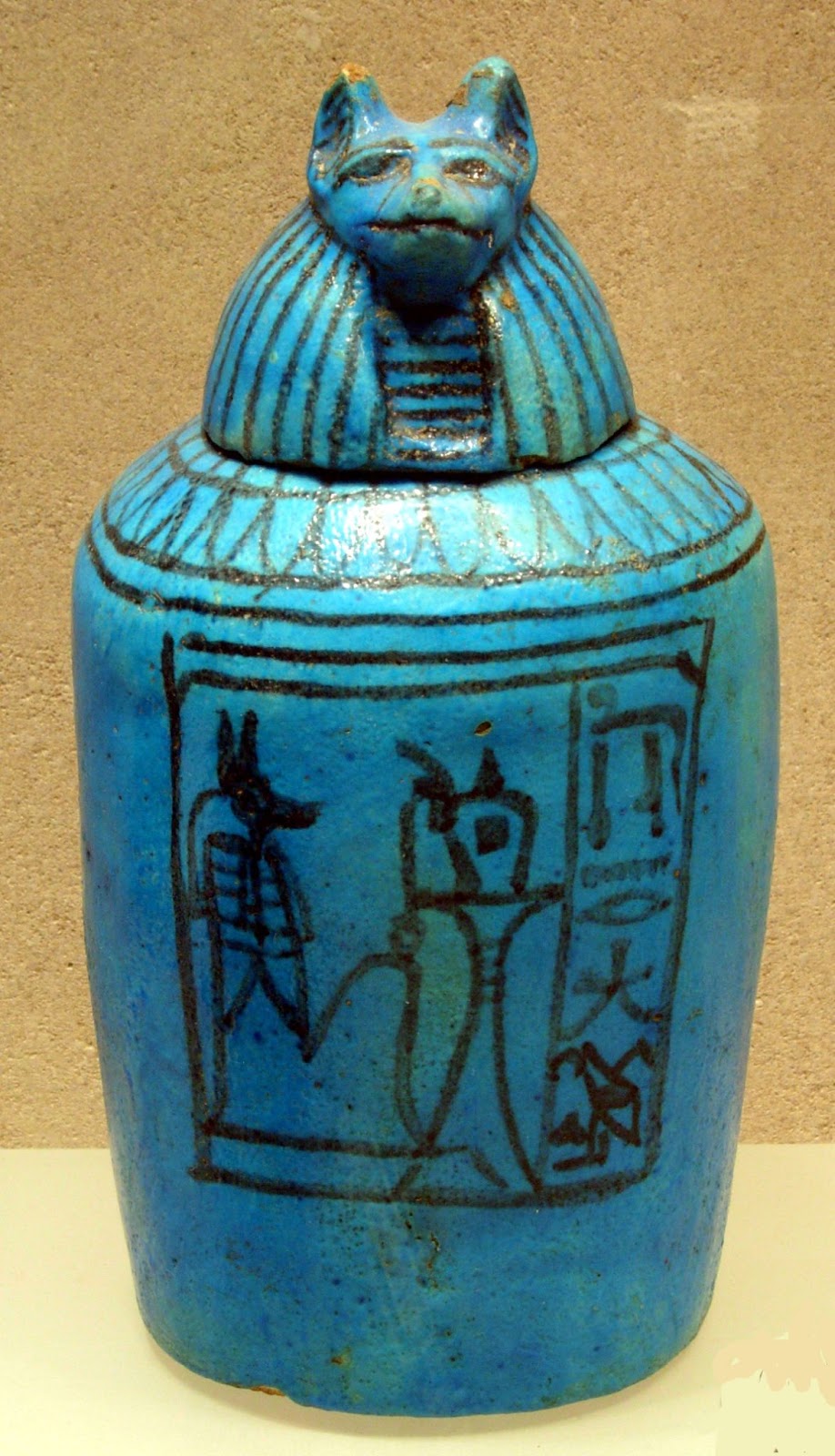 A canopic jar in the shape of Duamutef, with the hieroglyphs naming him (image: public domain)

One of the four sons of the Egyptian falcon-god Horus, doggy Duamutef is most often found on canopic jars. These stone or pottery vessels housed the internal organs removed from a body during the process of mummification, and were buried in the tomb with the deceased.

In ancient times, injuries to the stomach during battle were usually fatal. Duamutef, whose name translates as ‘He Who Adores His Mother(land)’, thus became protector of the stomach and those who had fallen in war. 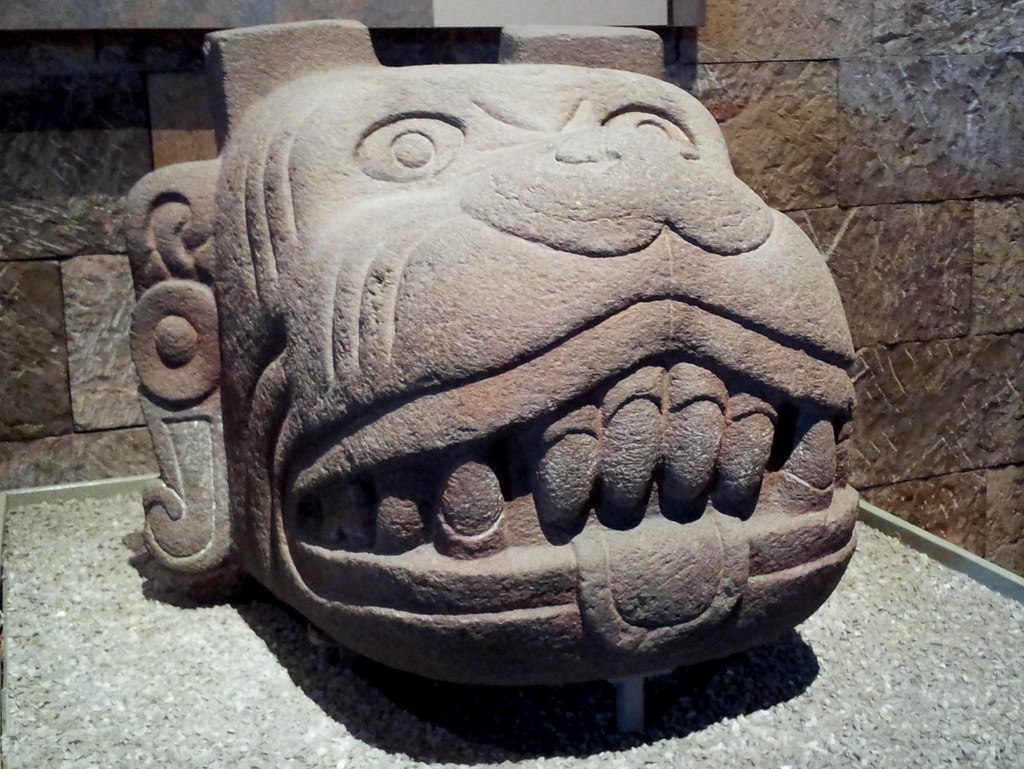 The Aztec culture of central Mexico has many terrifying gods, but Xolotl surely ranks as one of the scariest. The god of fire and lightning, he was also the patron of monsters and sickness - and like many of our doggy deities, he was worshipped as a psychopomp or guide for the souls of the dead.

Xolotl - usually in the form of a dog or dog-headed man, sometimes with skeletal backwards-facing feet - accompanies the sun through the underworld every night. As guardian of the sun, he rules over the day and is god of thunder. He is related to an earlier lightning-dog of Mayan belief, an animal that brought fire to mankind.

Dog sculptures and the remains of dogs have been found in numerous Aztec burials. It’s thought that these hounds were ritually sacrificed to accompany their owners into the underworld, so that the faithful dog’s spirit would guide his master through the dangers of the afterlife. 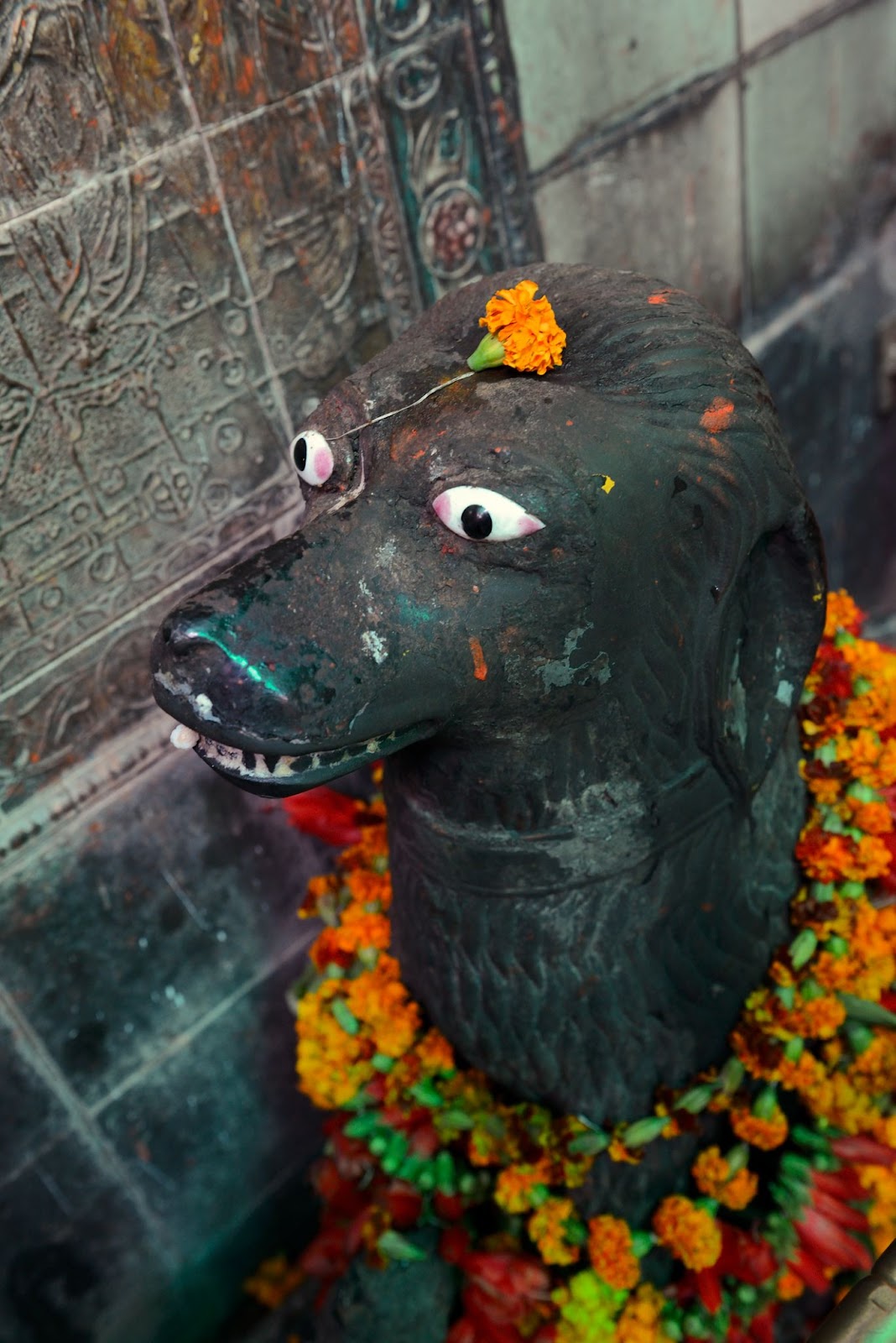 In Hindu mythology, the god Shiva in his form as Bhairava is accompanied by a dog named Shvan, as his ‘vahana’ or mount. A vahana represents an aspect of the god they serve but they can also act independently. Bhairava means ‘terribly fearsome form’ and he is known as a god who destroys fear or moves his followers beyond fear. He is often depicted with fangs, wearing a tiger-skin and a necklace of human bones. His dog symbolises both his ferocious personality but also his role as a protector. 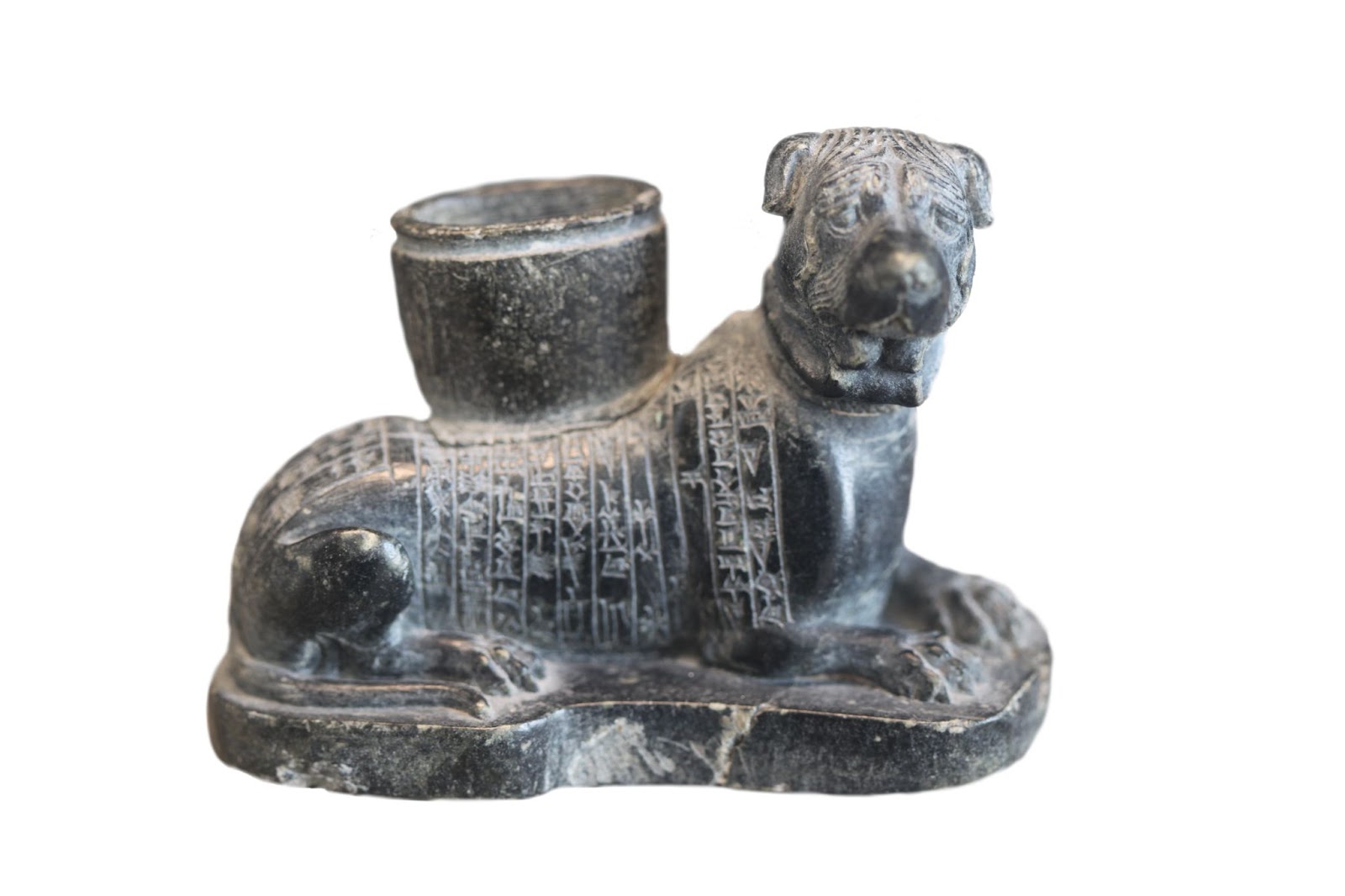 In ancient Sumer (modern Iraq), Ninsun, goddess of healing, was associated with dogs. She appears in the oldest surviving piece of literature, the Epic of Gilgamesh (written around 2100 BCE), and over time was merged with other ancient Near Eastern healing deities such as Gula and Bau.

Addressed by worshippers as ‘great healer of the land’, Ninsun/Bau was believed to cure illness through dream divination. Patients would attend a special sanctuary, drink herbal potions to bring about a deep sleep, and priests would be ready to interpret the goddess’s will when the patient awoke. Seeing a dog or dogs in the dream was a favourable sign.

But the goddess also had a violent side - her anger ‘makes heaven tremble and the earth quake’, according to one inscription. Curse tablets often invoke her and her dogs, begging them to bring disaster on evildoers. 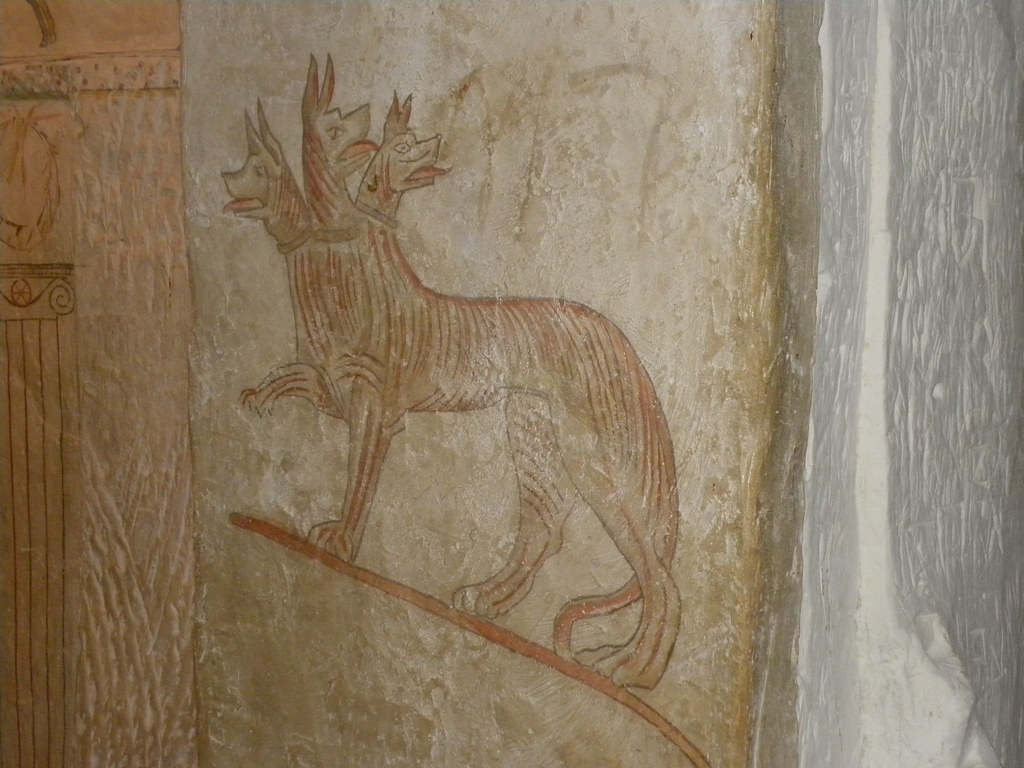 A Hellenistic tomb-painting of Cerberus from Maresha in Israel (credit: Ian W Scott)

The original hell-hound of Greek mythology, Cerberus guards the route to the underworld. In one of his earliest appearances in literature, the 7th century BCE poet Hesiod describes the fearsome doggo as ‘the brazen-voiced hound of Hades’ who welcomes in the newly arrived souls of the dead but attacks and tears to pieces any that try to escape.

The son of storm-god Typhon, Cerberus has three heads - or in some sources up to fifty heads - and is so huge he fills the length of the cave where he lives. The Roman poet Virgil describes how the hero and legendary founder of Rome, Aeneas, entered the underworld and drugged Cerberus with food doused in honey and herbs to make the monstrous dog fall asleep.

But the most popular myth associated with Cerberus comes from the Twelve Labours of Herakles (Hercules). This son of Zeus was set a dozen tasks to complete, from cleaning out the Augean Stables of the dung of 1,000 immortal cattle to killing the fearsome Hydra, a many-headed snake monster that was also one of Cerberus’s siblings.

The final task awaiting Herakles was to go down into the underworld and bring back Cerberus. Could the mighty hero overcome death itself?

Well yes, he could. Herakles asked the god of the underworld, Hades, for permission to borrow his guard dog, but the hero still had a fight on his hands. Eventually he wrapped his lion-skin (taken from the Nemean lion, Herakles’s First Labour) around Cerberus’s heads and dragged the hell-hound above ground.

Disoriented like a doggy that’s done too many zoomies, poor Cerberus threw up... and from the puddle of canine sick grew the aconite plant, also known as wolf’s bane, which was thought to keep people safe from vampires and werewolves.