Coronation Street is no stranger to a canine cast member or two - from Schmeichel the Great Dane to Eccles and Cerberus.

And even off-screen, the stars of the 60-year-old ITV show are huge dog lovers - with one puppy-loving actor sharing not one, but three chihuahuas with his partner!

Some of the four-legged actors from the soap are the real pets of their on-screen co-stars, while others were welcomed into their owner’s lives during the coronavirus pandemic.

Here are some of the gorgeous pooches owned by the cast of Coronation Street. 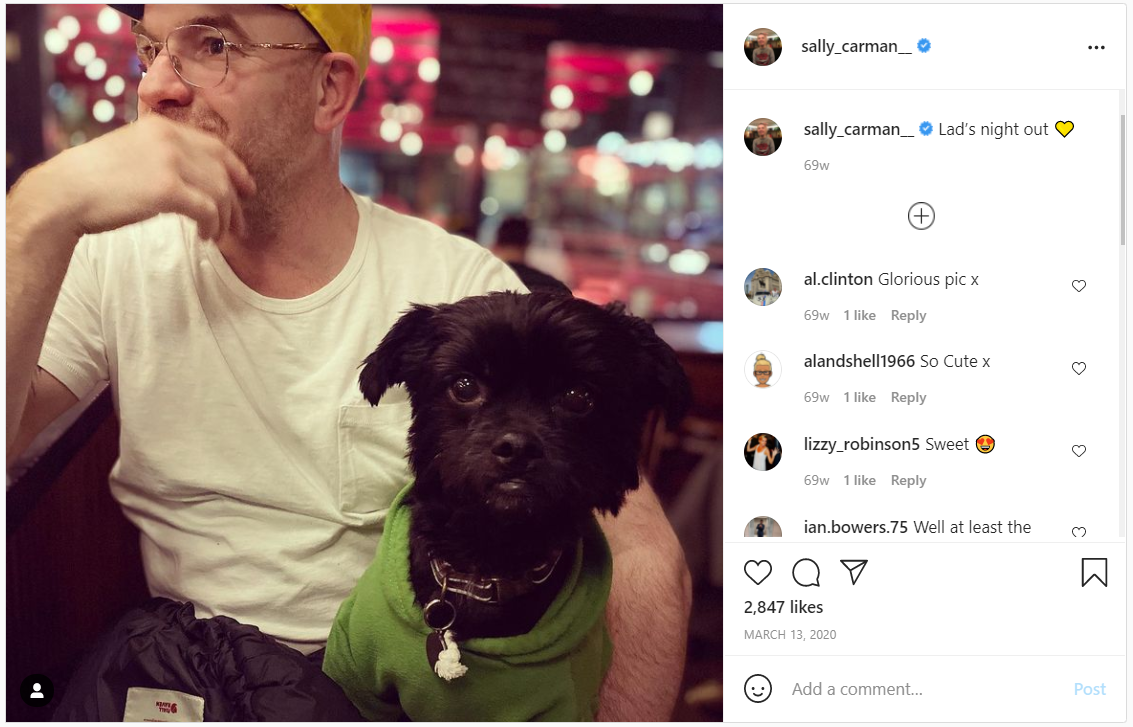 The pooch, named Fig, is now five years old, and was welcomed into the family after Joe’s dog, Doug, died.

The 14-year-old black Labrador passed away in February 2016, with Joe taking to Instagram to share his grief. He said: “Good night Doug, you were by my side for 14 years, thank-you for walking with me.”

Fig has featured in a number of the soap stars’ Instagram photos since the following December, especially on Sally’s account where he can often be seen cuddling his dad, Joe. 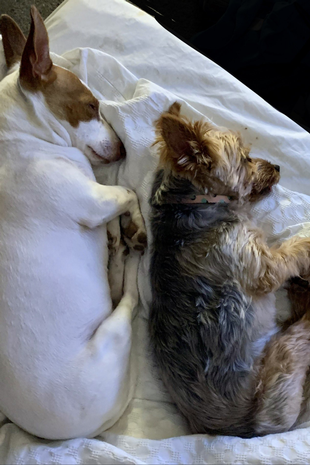 Rover, the Jack Russell that Steve McDonald found in the back of his Street Cars cab in 2015, is actually one of Simon Gregson’s pets!

The pooch, who’s real name is Cookie, joined their dad on screen in scenes where Steve became smitten with the dog, who’s name was actually Boo-boo.

In the storyline Boo-boo was returned to her rightful owners, but kept coming back to Steve, and on the third occasion, the owners allowed Steve to keep the dog. 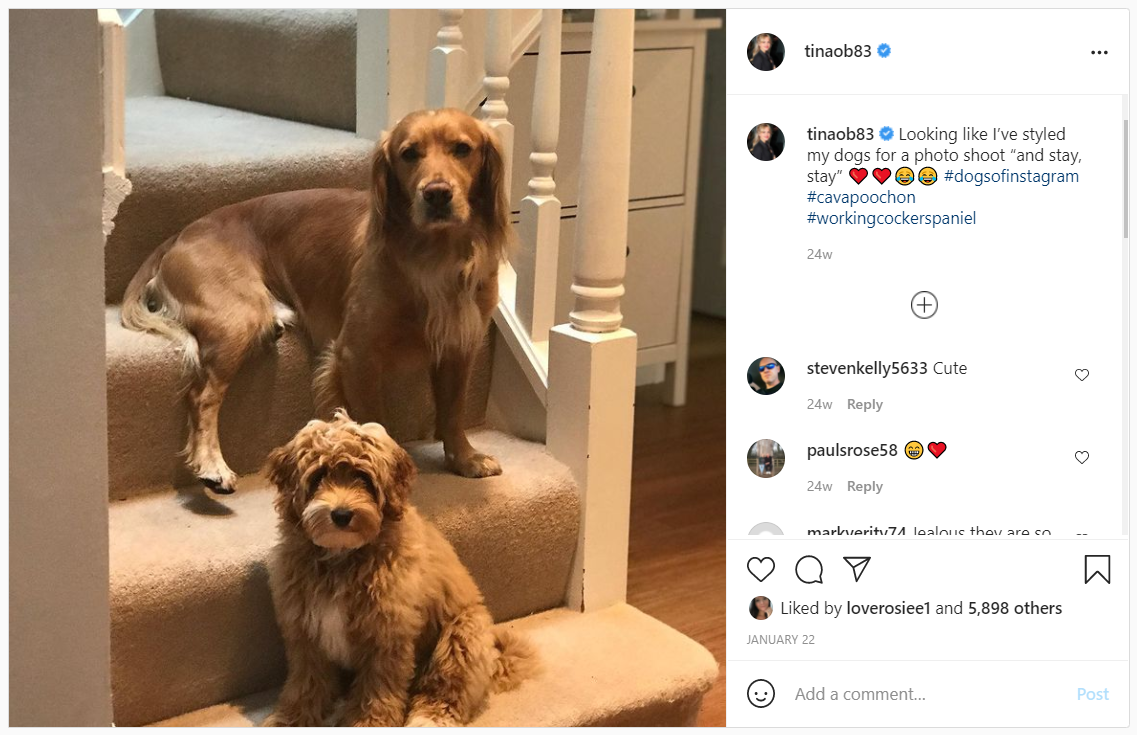 The cheeky spaniel has been spotted on her feed several times, but the most hilarious was when the pup knocked over the Christmas tree in 2018.

In lockdown, Tina doubled the trouble and welcomed a cavapoochon called Cookie into the family, who has become best buds with five-year-old Chase. 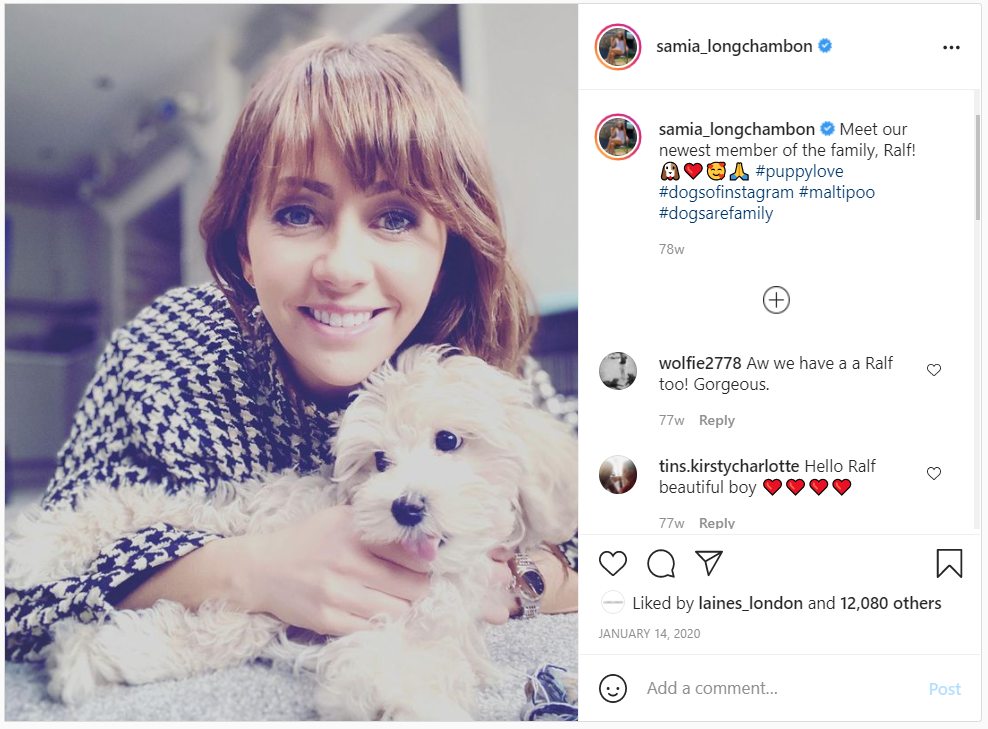 Maltipoo Ralf joined the Longchambon household in January 2020, after Samia lost her pet of 11 years in 2017.

When her beloved pooch - who she’d had from the age of 23 - passed away, she said: “This week we had to let our beautiful Sonny go to sleep.

"He was by my side for for 11 amazing years, the best dog I could have ever wished for. We miss him more than words can say... look after him dad.”

Now, little Ralf has been joining her on adventures and entertaining her followers with his expressive face! 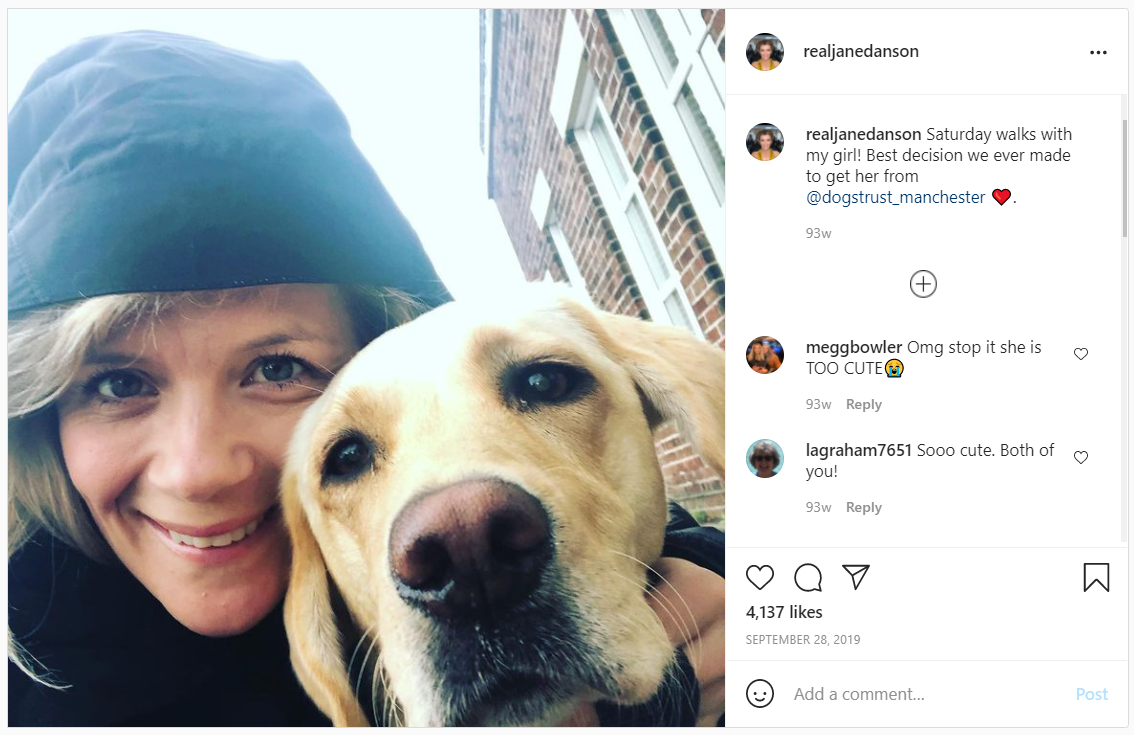 Jane Danson’s dog, Millie, was adopted from Dogs Trust Manchester in 2019 and loves rainy walks with the Leanne Battersby actress.

She introduced the Labrador on Instagram with the caption: “Us and out girl. We have recently welcomed this little lady from the fantastic Dogs Trust Manchester. We love her already. Thank you for all your help - what a great organisation.”

Jane has said that getting the dog was the "best decision we ever made". 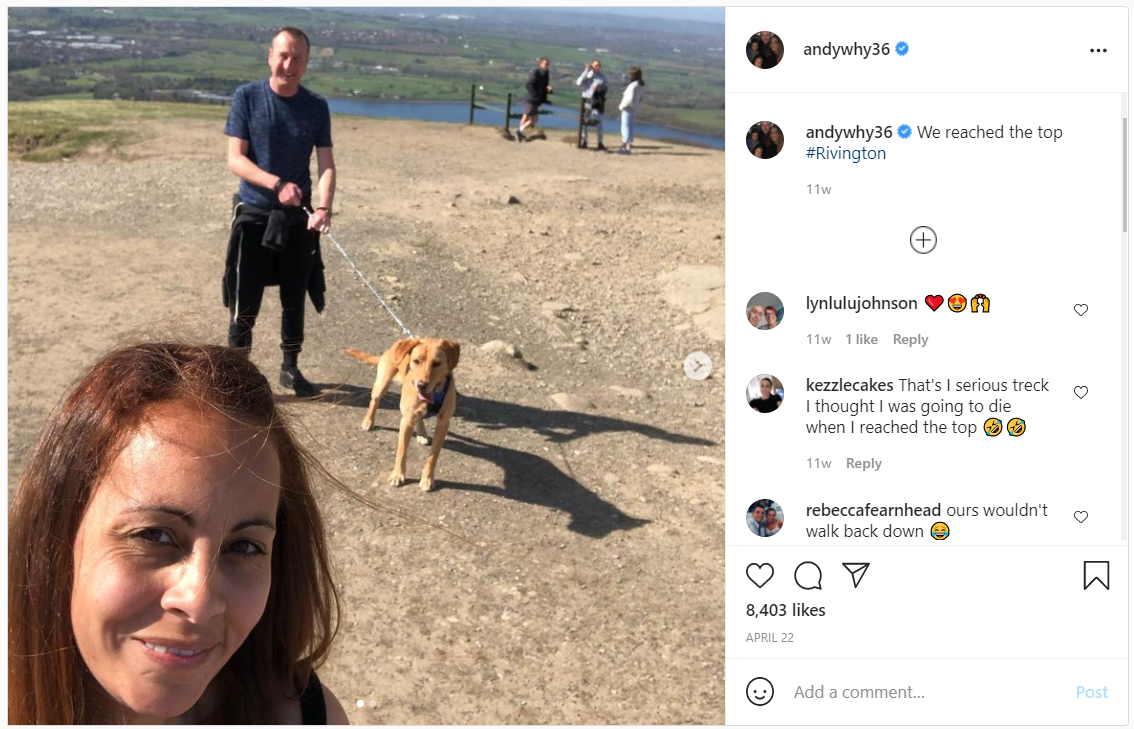 Around 3.2 million households welcomed a pet into the family during lockdown, and stars from the cobbles also found company with a four-legged friend.

Andy, who plays Kirk Sutherland, and his wife Nicola Willis got Rolo as a puppy in October 2020, and has joined the couple on a number of adventures.

The pup even took on the challenge of climbing Rivington Pike in April, making it to the top with Andy and Nicola in tow. 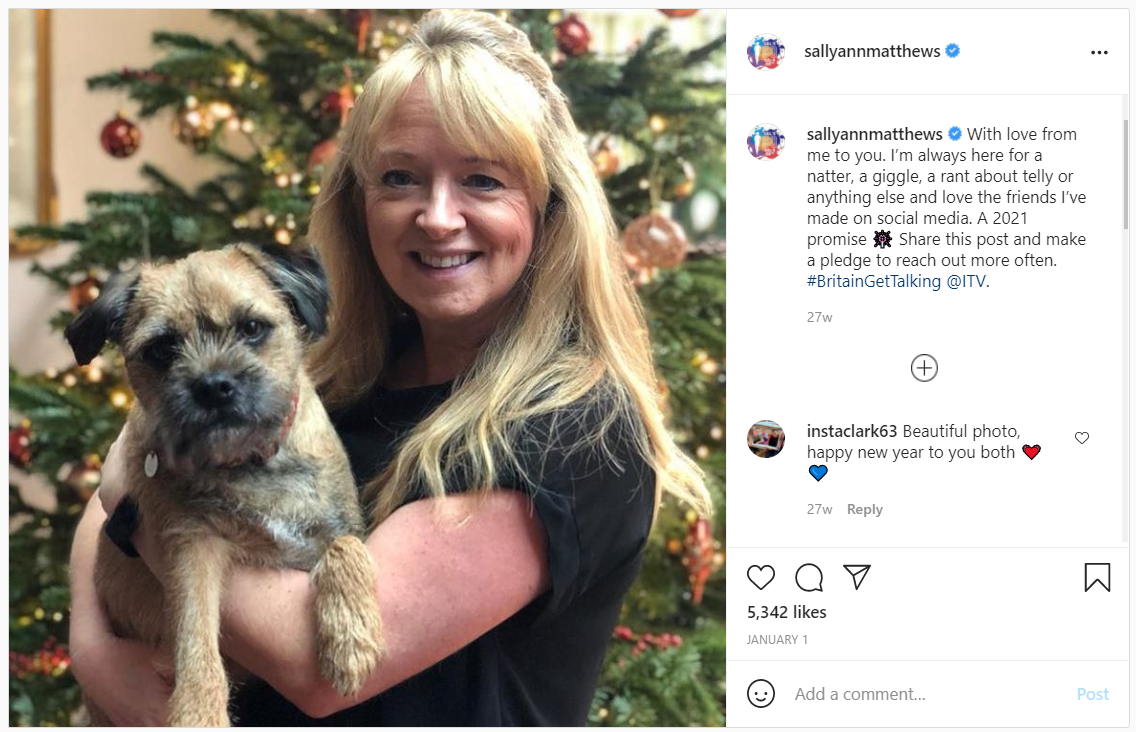 Border Terrier Veto enjoys boat rides, digging up the garden and finding the perfect spot to have a nap. Like most dogs, he likes to get up to a bit of mischief - such as the time he wound up in the vets after licking a jellyfish on the beach, or when he stole three tennis balls in the dog park!

The terrier is currently embarking on a charity challenge with 50-year-old Sally, who decided to complete the couch to 5k challenge to raise money for five charities.

Veto has been spotted on a few of the Fitbit photos Sally has posted post-run! 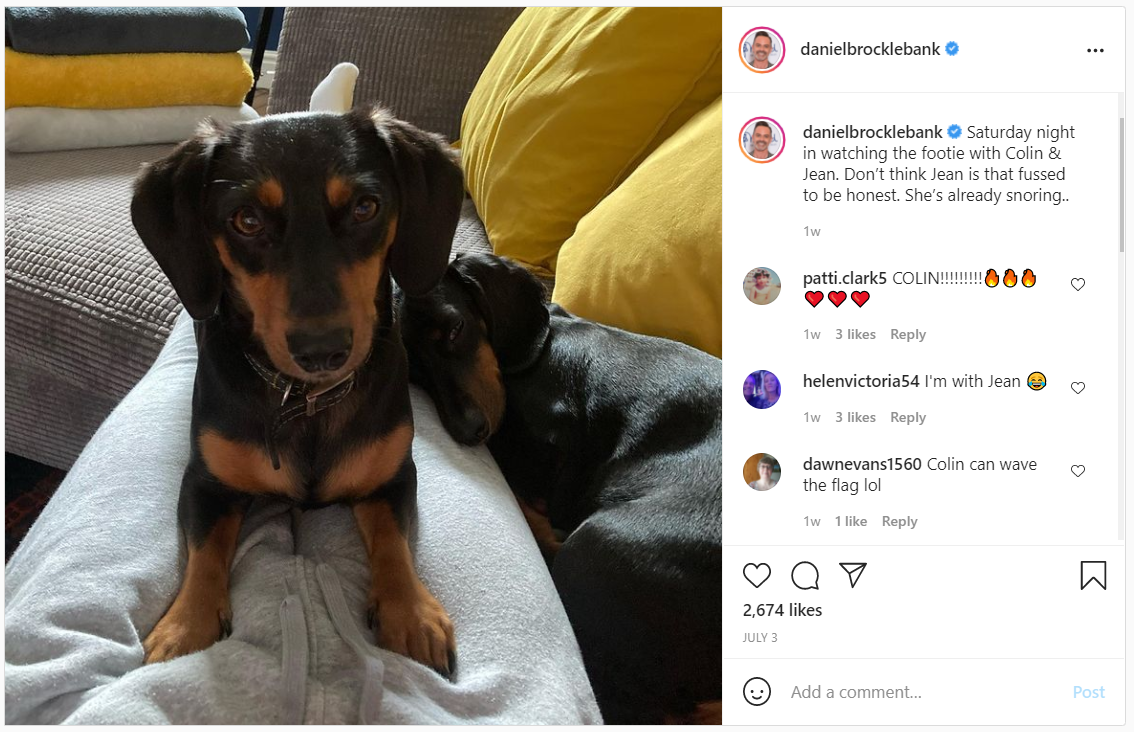 On sharing the pup with his fans, he encouraged others to also consider adopting a dog, saying: “I’d like to introduce you to the new man in my life. Meet Colin! Huge thanks to the Dogs Trust for all your help and guidance. Adopt and give one of these little beauties their forever home.”

Colin is much-loved among the rest of the Corrie cast too, and has been pictured with Julia Goulding, Lucy Fallon, Sally Ann Matthews, Jane Danson and Charlie De Melo.

Colin has now been joined by another black and tan daxie called Jean who loves a cuddle! 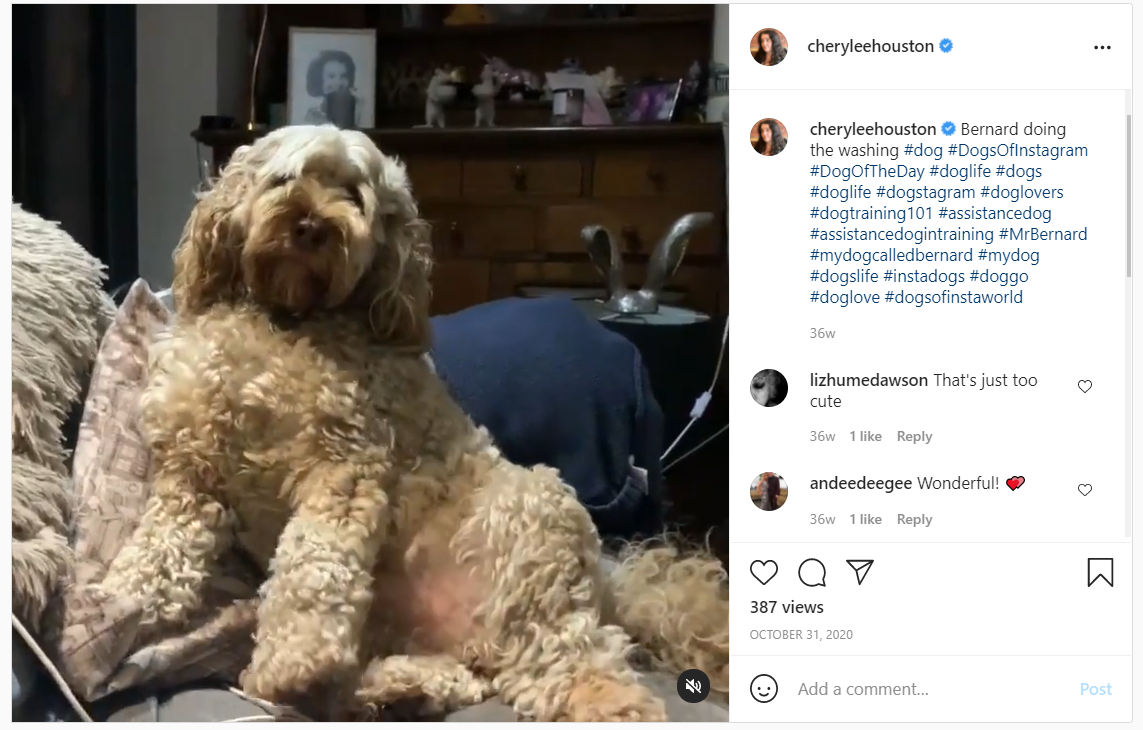 Cherylee, who stars in the ITV soap as Izzy Armstrong, doesn’t share much of her life on Instagram, but five of her 14 snaps feature her gorgeous dog Bernard.

The actress shared on Twitter that she was looking for an assistance dog in 2019, with Bernard bounding onto the scene the following year to help the wheelchair user with particular tasks.

The clever pup has been trained to help Cherylee with the washing, passing her dry garments from the washing maid to fold up, or from the pile of wet washing to hang up to dry! 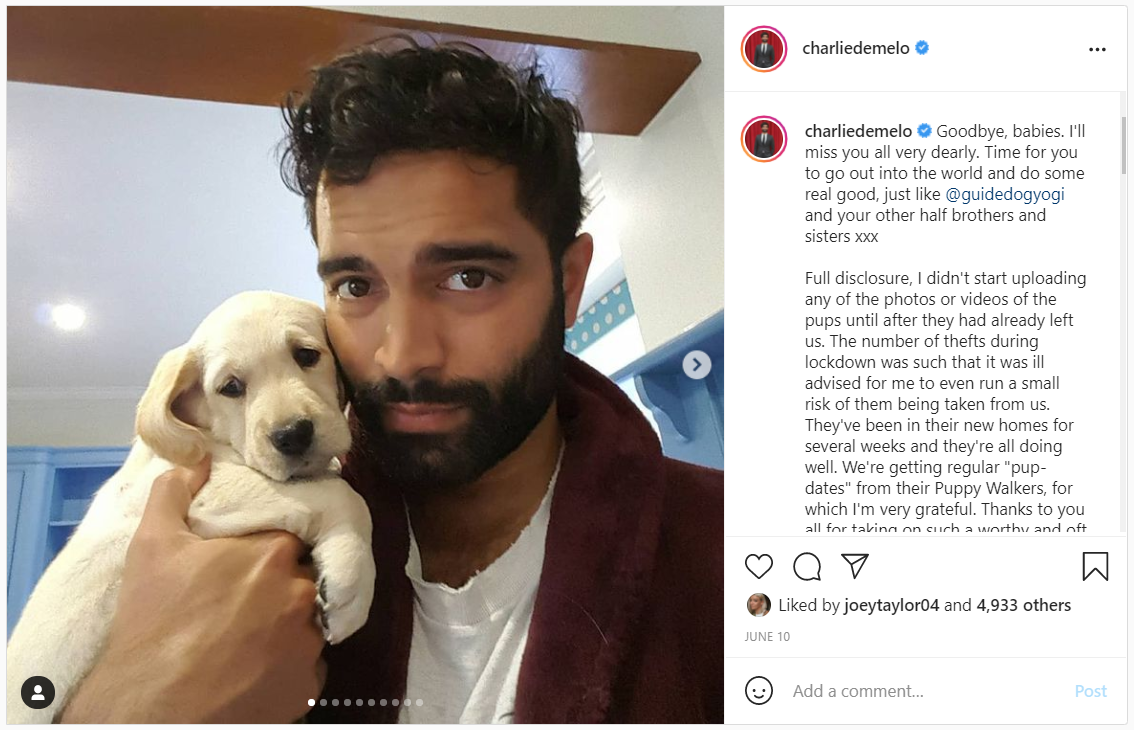 In June, Charlie De Melo revealed his dog Toni had a litter of seven puppies, who would go on to be trained by the Guide Dogs charity.

Charlie, who plays Imran Habeeb in the ITV soap, shared photos of the dogs after they had left for their next chapter, and said: “‘Goodbye, babies. I’ll miss you all very dearly. Time for you to go out into the world and do some real good, just like @guidedogyogi and your other half brothers and sisters.”

In another post, he added: “I didn't start uploading any of the photos or videos of the pups until after they had already left us. The number of thefts during lockdown was such that it was ill advised for me to even run a small risk of them being taken from us.

“They've been in their new homes for several weeks and they're all doing well. We're getting regular 'pup-dates' from their Puppy Walkers, for which I'm very grateful. Thanks to you all for taking on such a worthy and often overlooked responsibility in these dogs' development.”

Toni’s puppies were called Hazel, Keith, Bertha, Susan, Monty, Stella and Daisy, and the Corrie actor is hoping his other retriever, Sarah, may go on to have a litter in the future. 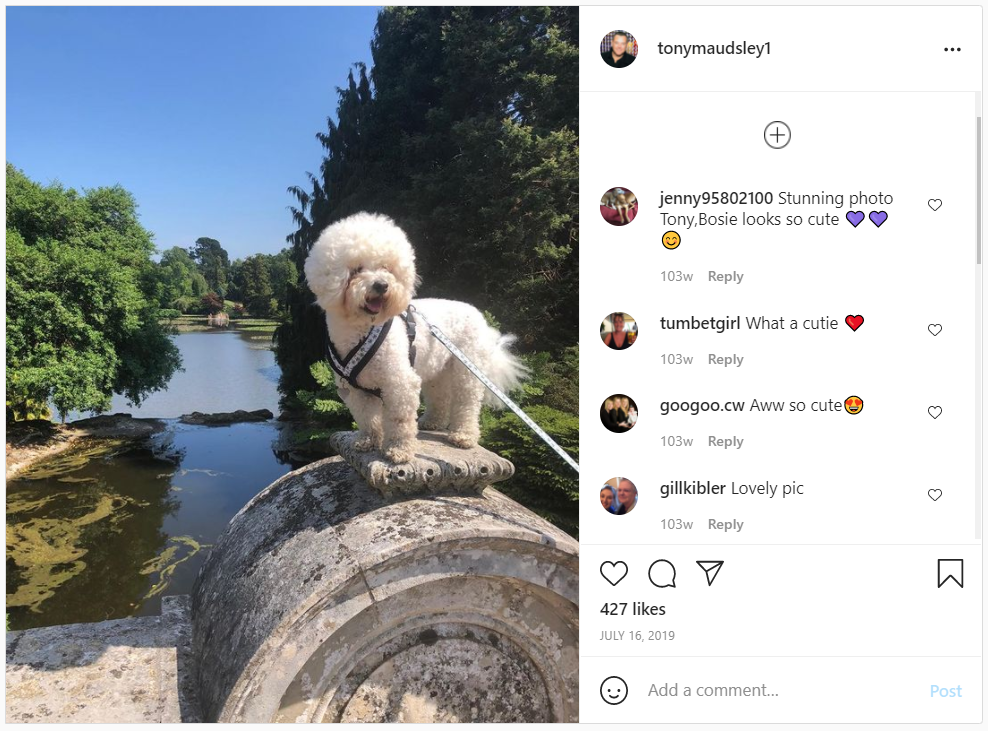 Tony’s Bichon Frise, Bosie, has their very own chair bed and a crochet toy of her dog dad starring as Kenneth Du Beke in Benidorm.

The actor now plays George Shuttleworth in Corrie, and has even performed in pantomimes between trips to the beach and exciting walks with Bosie. 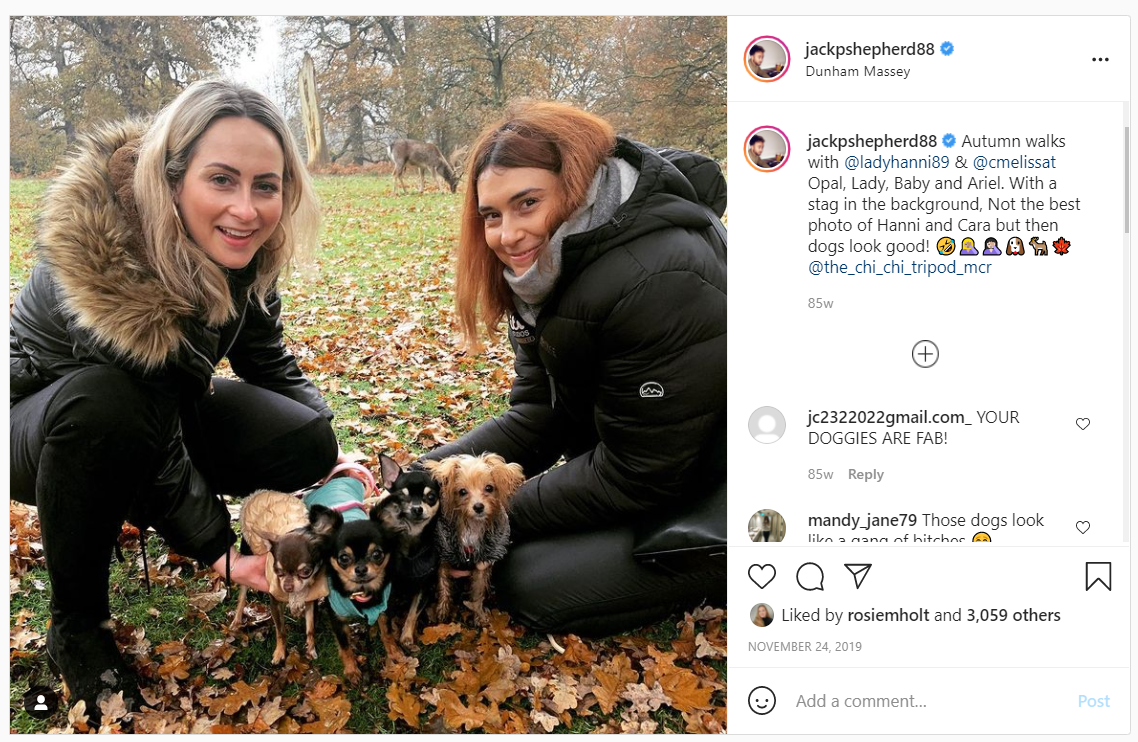 Jack and Hanni shared tiny chihuahua lady back in 2018, who was an only-dog until that very Christmas, when Jack surprised his partner with a second pooch!

Filling the house with balloons and pouring a glass of bubbly, he hid the chihuahua in a baby cot as an early Christmas gift. 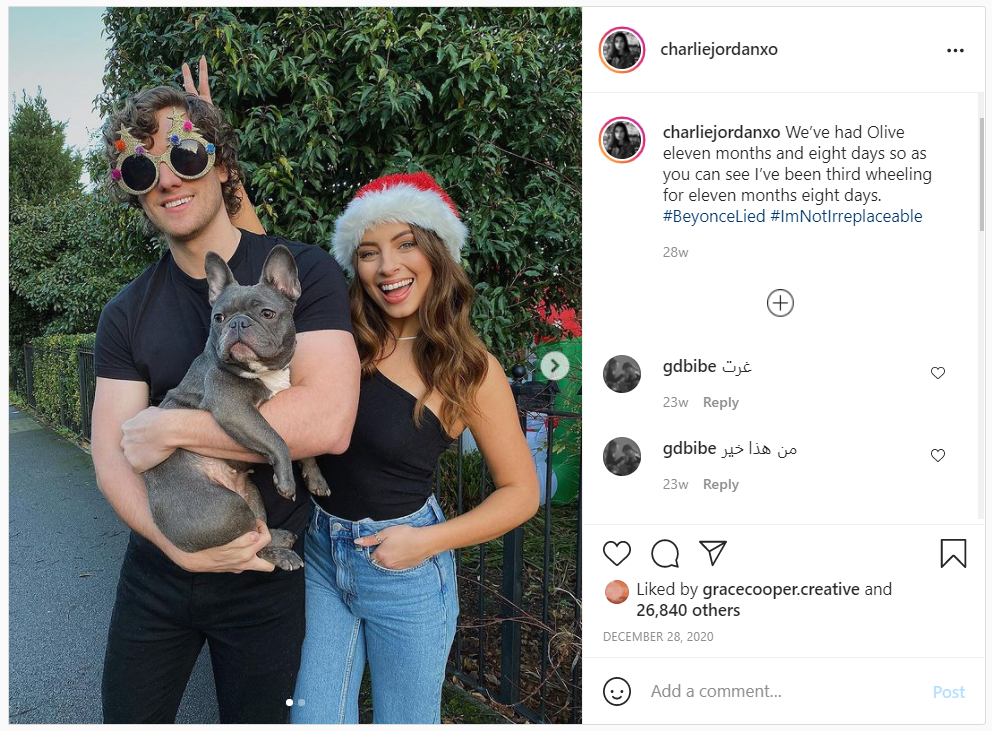 Joining Charlie Jordan and her partner in January 2020 was French Bulldog Olive - a gorgeous grey pup who’s been dubbed as a daddy’s girl.

Charlie - who plays Jenny’s step daughter Daisy Midgeley in the soap - shared a picture of her and her boyfriend with the dog in December 2020 with the caption: “We’ve had Olive eleven months and eight days so as you can see I’ve been third wheeling for eleven months eight days.”

In fact, during socially distanced filming of the soap, Charlie’s partner was even roped into the cast himself, as Ryan Connor’s thigh double! 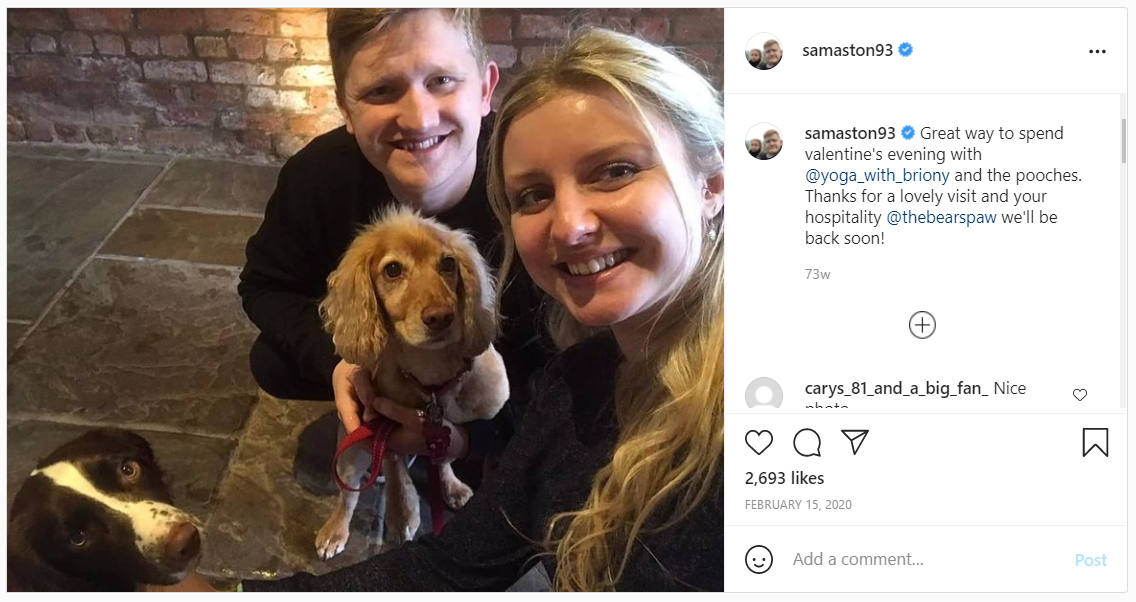 Sam’s character, Chesney Brown, was totally smitten with Great Dane Schmeichel in the ITV show, so it’s no wonder he’s a dog lover off screen too.

He heartbreakingly said goodbye to his black Labrador, Bella, in 2019, penning the caption: “Earlier today, I said goodbye to my beautiful black lab. It’s very true when they say a dog is a man's best friend. Sleep well Bella.....You were and will always be my girl.”

And the newly-weds lost a second dog the day after they tied the knot in May the same year.

The couple now have two spaniels who join them on Scottish retreats and trips to the pub!