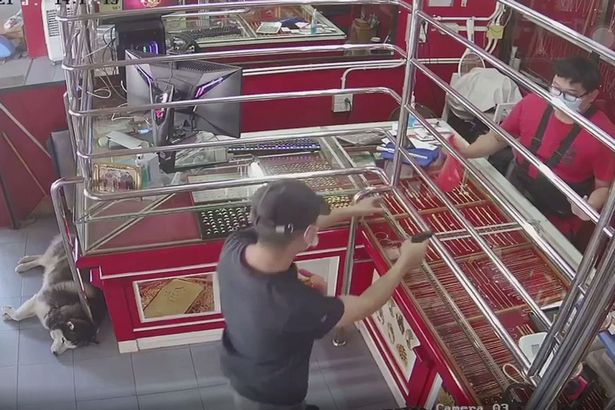 Thieves would have had a ‘Lucky’ escape with this jewellery store ‘guard dog’ after she continued her snooze whilst an armed robbery training exercise took place.

The husky was caught on CCTV - which has gone viral - napping whilst the Thai jewellery shop was raided in a set-up situation.

The pooch, named Lucky, failed to protect the staff being held at gunpoint by robbers, as she caught up on her beauty sleep in front of the counter, reports The Mirror.

Thai police visited Worawut Lomwanawong's store to train staff on how to react if they were under attack and being forced to hand over the jewels.

As a fake armed robber enters whilst pointing a gun at staff, the husky didn’t move a muscle whilst her owner handed over a bag of ‘cash’.

The owner can be seen glancing at the dog in the hope she might attack the bandit or bark to raise the alarm, but gets nothing in return.

It's fair to say Lucky failed the test and the hilarious video was uploaded to Facebook where it has racked up more than one million views.

But her owner believes there is a valid reason why the dog didn’t attack the fake thief.

Worawut told Bored Panda: "This was Thai police training of what it would be like if a thief came into my store and stole all the jewellery.

"The armed robber in this video is a policeman that my dog Lucky already knew; maybe that’s why she did nothing.

"I found it very funny to see that she didn’t even try doing anything and continued to sleep."

Worawut has been left blown away by the viral success of the clip and the interest in Lucky, and the video racked up plenty of comments from viewers who joked the 'robber' was fortunate that Lucky knew it was only a training exercise - otherwise it would have been a very different story.

Heard the one about the family who all wanted a dog but Dad didn't?

(Yes, you can guess how that worked out. Read it here.)