Can a Tarot reading help a troubled dog? TeamDogs put it to the test | TeamDogs

This article contains affiliate links, we may receive a commission on any sales we generate from it.

Once the preserve of seaside clairvoyants, Tarot card reading has seen a resurgence amongst Millennials and Gen Z - and according to several practitioners, it’s no longer just humans seeking guidance for the future. Some Tarot specialists now offer readings for dogs and other pets.

We at TeamDogs were intrigued and decided to investigate further.

The history of Tarot is uncertain but it’s been used for centuries to divine the future through reading the cards.

Briefly, a Tarot deck is 78 cards divided into 22 Major Arcana and 56 Minor Arcana. The Minor Arcana is the same as a standard deck of cards, having four suits, with each suit containing the court cards of Page, Knight, Queen and King. The court cards usually represent people, and the suits correspond to areas of life - Cups for emotions and feelings, Staves for work and leisure activities, Swords for problems and annoyances, and Coins for possessions and financial matters.

While the Minor Arcana deals with day-to-day issues, the Major Arcana - featuring cards like the Hanged Man, the Tower and the Fool - is much more powerful, presenting an overview of what’s going on in the questioner’s life and suggesting ways to deal with any issues. In any reading, if Major Arcana are present in a significant percentage of the spread, practitioners believe that the client faces a time of major change or opportunity. 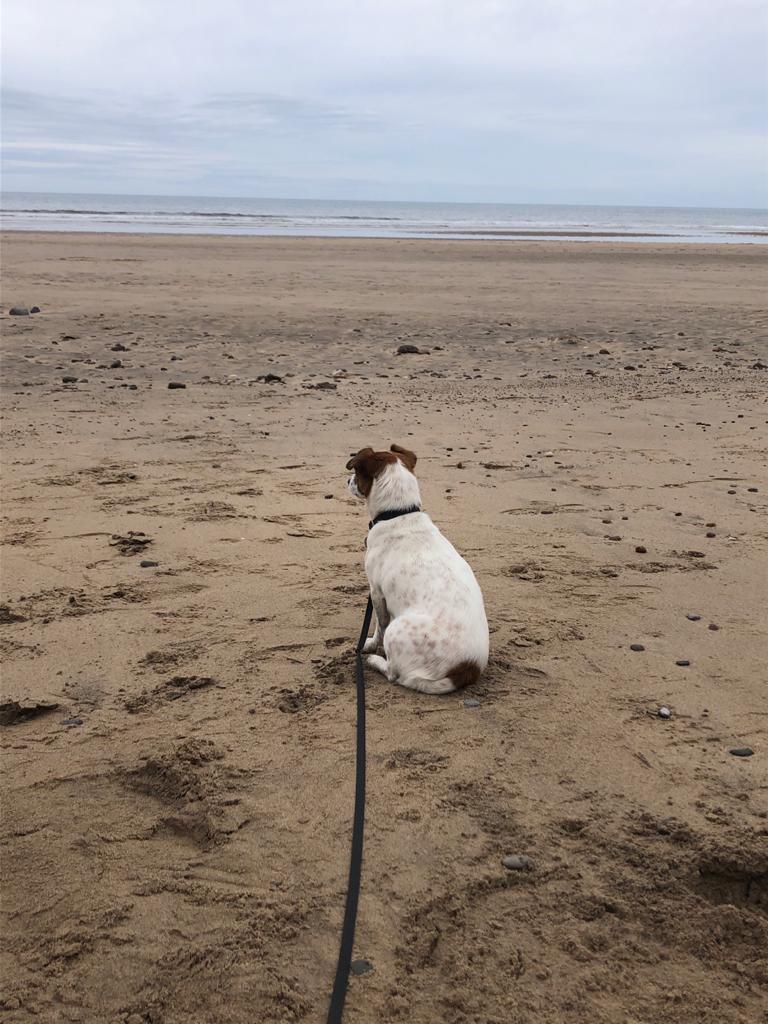 Gina is a three-year-old Jack Russell from Yorkshire. She lives on a smallholding with her owner Jan and family, plus an older dog and a cat. Previously very sociable and outgoing, in recent months Gina has become withdrawn and reluctant to go outside. She is still happy to see guests and is welcoming to visitors, but behind closed doors Jan describes her as ‘having a right sulk’.

A few months ago, Jan adopted a pair of lambs and then two donkeys. The lambs in particular demanded a lot of attention as they required bottle-feeding. At first Gina would accompany Jan to the lambs’ pen and as they grew older would interact with them, but there came a point where she was no longer willing to go anywhere near these woolly interlopers.

Jan wondered if Gina was jealous. Her repeated attempts to reassure her DD that she was still a loved and important member of the family met with the cold shoulder and a droopy tail.

Could our doggy Tarot reading give Gina a way to voice her thoughts? 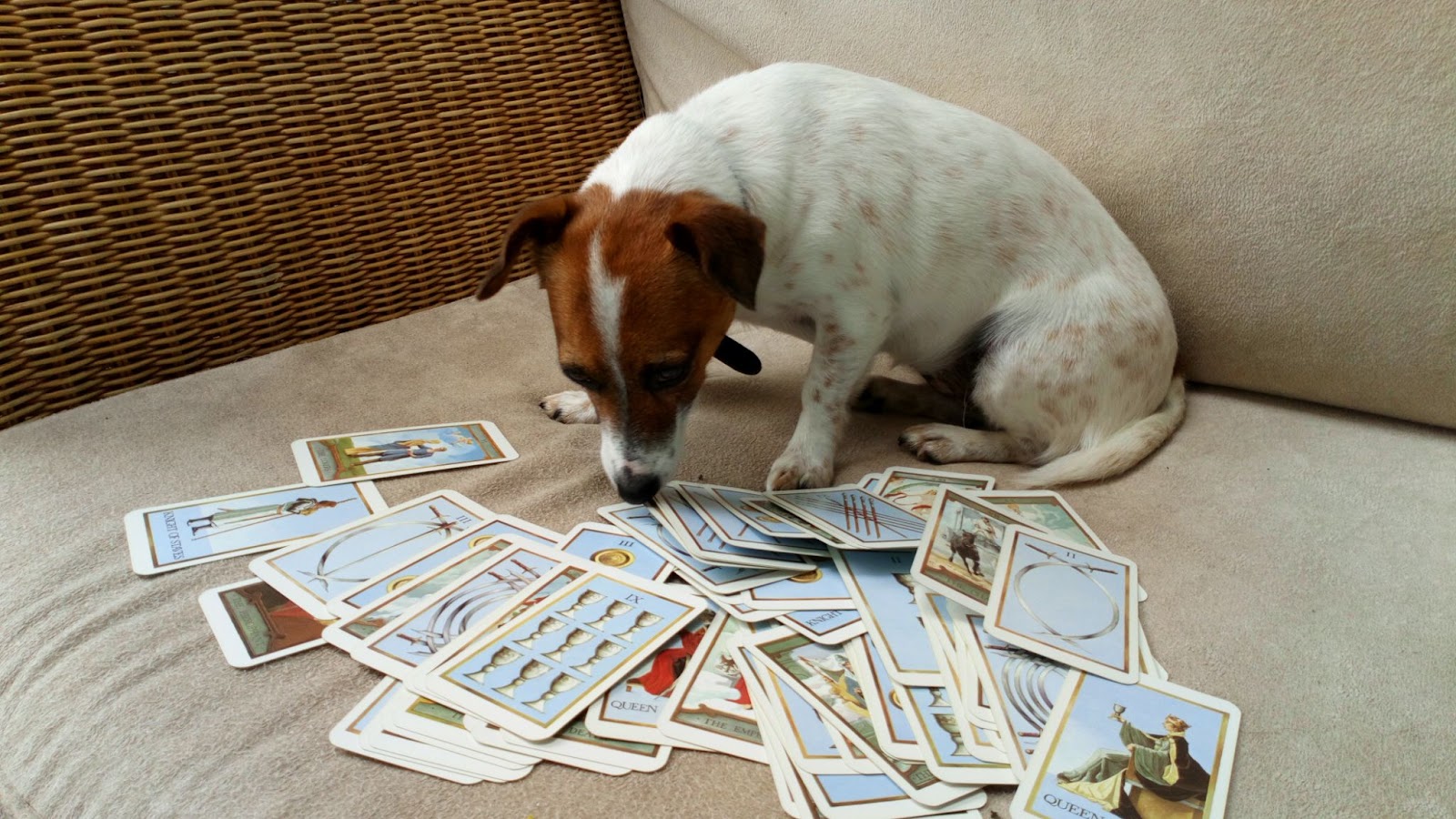 We admit we were sceptical about reading for a pet. It’s one thing to read for a human, but a dog can’t tell you what’s troubling them and can’t formulate specific questions. That’s why our Tarot reader decided on a more generalised approach, using a six-card spread laid out in three rows.

First she established a rapport with Gina, sitting at the dog’s level and stroking her, offering Gina treats. Then she shuffled the cards while Gina looked on. During an ordinary Tarot reading the client will pick their own cards, but this time the reader selected cards on Gina’s behalf based on how engaged the pup seemed.

Here’s the spread that Gina ‘chose’. 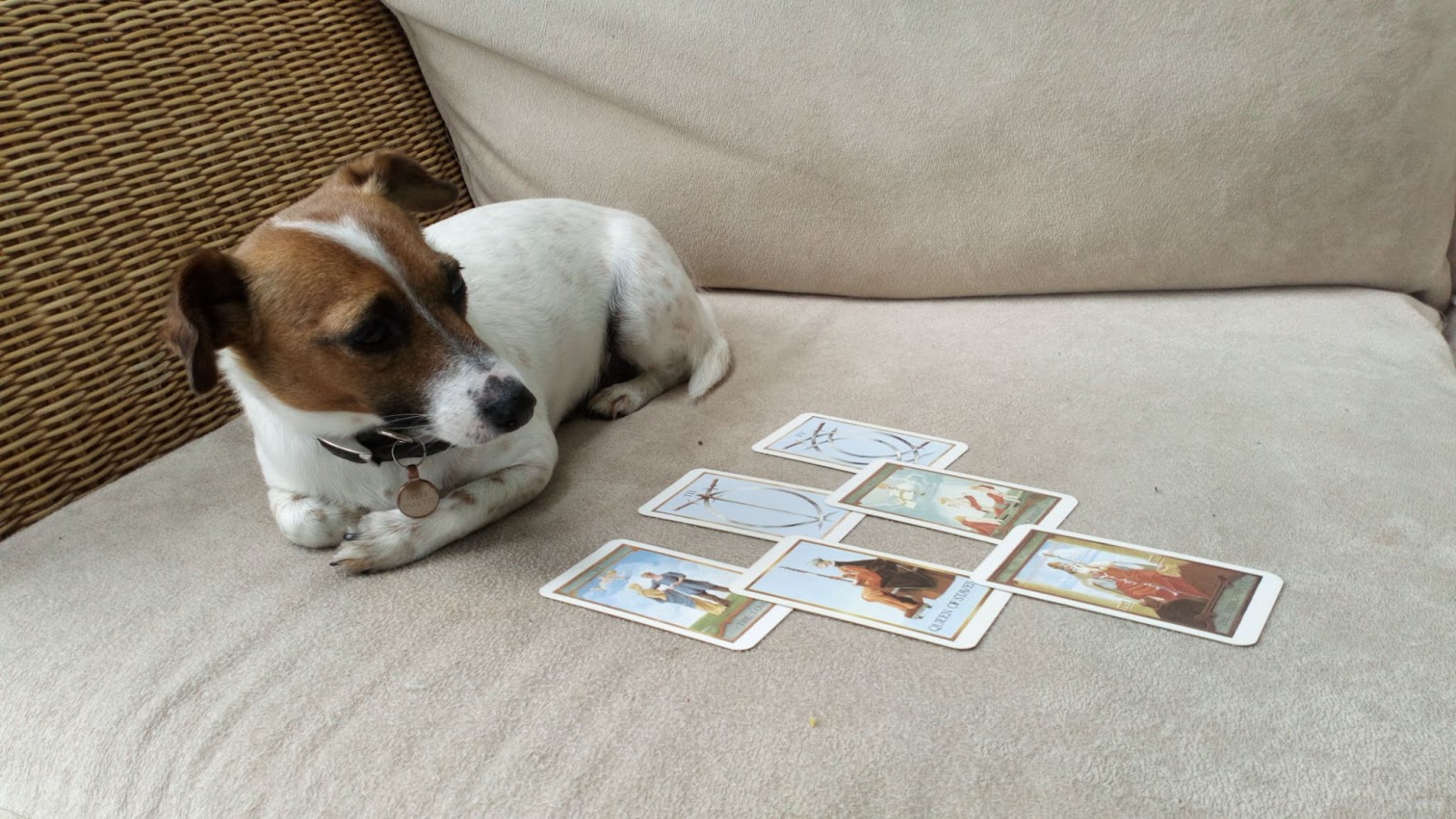 Gina is satisfied with her selection

Row 1 represents the past. The Lovers indicate a close harmonious relationship, one full of affection and love. But this bond is suddenly severed - the Three of Swords indicates loss and heartbreak. The Four of Swords beside it shows that Gina needed to take a break from the situation that was upsetting her.

Row 2 symbolises the present moment and actions that need to be taken to resolve the problem. The Queen of Staves in Gina’s reading represents her owner Jan. To Gina’s eyes, Jan is a great companion and lots of fun, but hard to ‘possess’ as she has a mind of her own. The card paired with it is Judgement - this doesn’t mean that Gina is judging her owner, but rather she’s judging herself.

“Gina is wondering if her withdrawn behaviour has had any impact and if it’s worth continuing to sulk,” said our Tarot reader. “She wants Jan’s attention, but she doesn’t want it on the terms that exist between them currently. Gina seems a little stuck in a dilemma of her own making - her sulks have made Jan worry and Gina possibly feels guilty - but not quite guilty enough to snap out of it yet.”

But change is definitely on the way. Judgement is a Major Arcana card, and its place in the spread suggests that Gina is willing to turn a corner on her behaviour.

Row 3 shows the outcome if the advice is followed. The Hierophant symbolises conventional thinking as well as kindness. It suggests that the client should look at the motives driving their actions. Gina needs to accept her place in the family and realise that Jan loves her just as much as she did before the lambs arrived.

By taking some time out, Gina pushed her problem away but now she’s ready to face it. She will be the bigger animal, even if the lambs are taller than her. 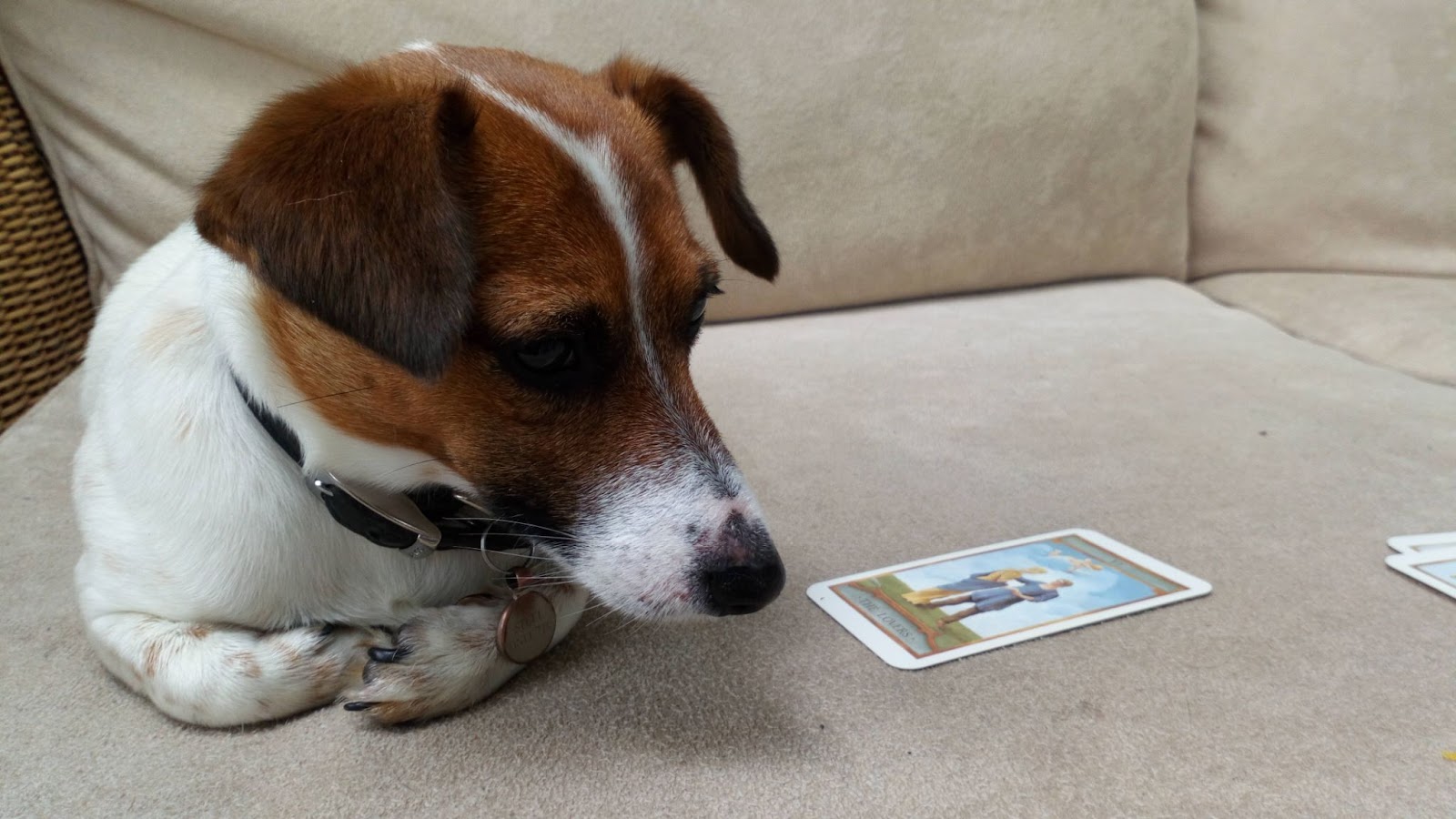 Gina takes a closer look at The Lovers card, which represents relationships and affection

So what did Jan think of the process?

“Well, it’s accurate about what we know,” she said.

“That’s what I want to get back,” she continued, referring to the first row of cards showing a break in a relationship. “Gina used to sit with me all the time and now she just stays in her bed. I want my friend back.”

It was the starting-point for a conversation about ways in which Gina could be made to feel more special, so she could regain her sense of partnership with Jan.

Jan described the reading as “helpful”, but not everyone was convinced. Jan’s husband looked askance at the whole thing, and when our Tarot reader offered to lay out the cards for him, said: “No thanks, you’ll just tell me there’s more animals in my future!”

How can I read for my dog?

You could invest in some doggy-inspired Tarot decks such as Wise Dog Tarot or Magical Dogs Tarot, but for a beginner the Rider-Waite Tarot is the standard.

Once you’ve familiarised yourself with the cards and their meanings, select a spread - a simple layout is best when reading for a pet - and then spend some time with your pup. If you have a specific question, hold it in your mind - why does he chew the sofa, why does he suddenly hate the cat?

If you can get your DD to ‘choose’ a few cards, all the better, but don’t force it. Simply feel that bond with your pet and pick for them. Lay out the cards and see what they reveal. At first the cards may seem unconnected, but have a think about the messages they present and you’ll see that a narrative emerges.

As for Gina, Jan has promised to update TeamDogs on how she does in the coming months and if the cards were right to predict a change of heart. Good luck, Gina!